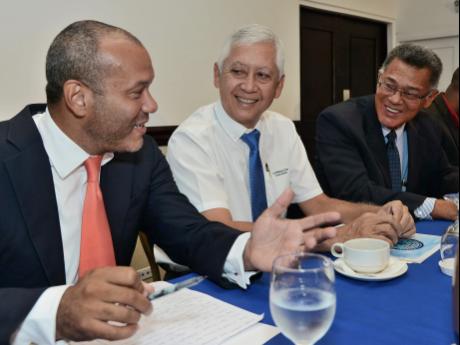 Ian Allen
Jason Hall (left), deputy director of tourism, cruise, events and attractions, with Wayne Chai-Chong (centre), treasurer of the Caribbean Golf Association, and Peter Chin (right), president of the Jamaica Golf Association, during a recent press launch of the 59th Caribbean Amateur Golf Championships, which will be hosted by Jamaica.

Two decades after Jamaica last hosted a major international golf tournament, the country is positioning itself to host another in just about two years' time.

Between 1991 and 1995, Jamaica hosted the Johnnie Walker World Golf Champion-ship that was supposed to rival golf's four major tournaments. But, after witnessing the likes of Fred Couples, Ernie Els, Larry Mize and Nick Faldo winning here, Jamaica has not had another opportunity to see first-hand the world's best players in action on the island after the tournament was discontinued in 1995.

Now, Jamaica could be set to host another major international tournament, having opened discussions with the Professional Golf Association (PGA), with the intention of bringing such a tournament here.

To raise the much-needed awareness, Jamaica, through Jamaica Sports, an entity launched in 2014 to help Jamaica benefit from sports tourism-related initiatives, has partnered with the Golf Channel to show off the Tryall and Cinnamon Hill golf courses, which are regarded among the best in the Western Hemisphere.

The feedback has been very positive and is why Jason Hall, deputy director of tourism at the Jamaica Tourist Board, believes Jamaica's prospects are good.

"It's now a question of concerting among ourselves to pool the funding required," he continued. "The next step is to identify the funding mechanism because, at the end of the day, we need to corral corporate sponsorship in such a way, getting all the stakeholders involved, because everybody benefits, the hotels benefit, the destination benefits, it's a veritable economy. So it's a question of bringing all of those entities together to then have a value proposition to present to the PGA."

Discussions, he said, have begun with the PGA, but they are still relatively embryonic.

"You have to get a sense of what is entailed, what the PGA requirements are; they have changed a lot since Johnnie Walker. We are also looking for different ways to penetrate this particular initiative, and that's a function of having really meaningful dialogue. We have an office in the USA; we have been meeting with various executives of the Ladies Professional Golf Association and the PGA, looking at broadcast partners, airline partners, hotel partners. These are all critical ingredients in the fashioning of a strategy moving forward to see major golf coming back to this destination," Hall said.

Hall was reluctant to speculate about the potential cost of hosting such a tournament, but on the face of it, those costs could run into several million US dollars.

"Having a major tournament here, prize money; these guys earn a lot of money," Hall said. Checks by The Gleaner revealed that prize money for a major golf tournament can exceed US$10 million, with the winner's purse often exceeding US$1 million.

"That's one aspect. In addition to that, there is the whole business of getting the media component - live coverage of the event; this is not stuff that is streamed. We, fortunately, have that capacity here and so we have quite a few of the elements in place already, it's just a question of how we can

position ourselves and synergise among them to deliver what we feel would be a first-class product."

He was quick to point out that the steps to hosting a major tournament might involve hosting a smaller tournament first. A preliminary step, he said, might involve the staging of 'a dot-com championship' which is the layer below PGA. "We are exploring those opportunities as well, but at the end of the day, we feel we have a competitive advantage."