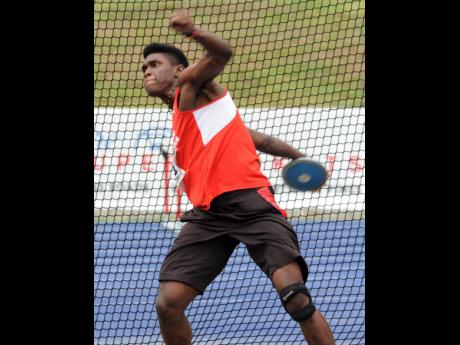 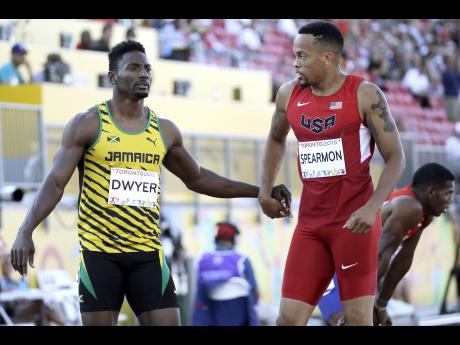 AP
Rasheed Dwyer of Jamaica, is congratulated by Wallace Spearmon of the United States after Dwyer won their 200 metres semi-final in a Pan American Games record 19.80 seconds.
1
2

JAMAICA'S medal tally went up by two at the Pan American Games in Toronto yesterday.

Fedrick Dacres won gold in the men's discus while it was bronze for Roxroy Cato in the men's 400 metres hurdles.

The day was also highlighted by a massive personal best and Games record 19.80 seconds in the semi-finals of the men's 200 metres by Rasheed Dwyer. He became the second-fastest man in the event this year behind world leader Justin Gatlin with times of 19.57 and 19.68.

Dacres had a best of 64.80m on his third attempt yesterday. Brazil's Ronald Juliiao took silver with 64.65m, with bronze going to American Russ Wiger, 62.64m.

Dwyer, the Commonwealth Games champion, took full advantage of the maximum allowable wind limit of 2.0 metres per second to win his heat and advance to the final. His time erased the 1971 mark of 19.86 set by the great Donald Quarrie in Cali, Colombia. Earlier, Jason Livermore finished down the track and failed to advance to the semi-finals.

Yesterday also saw the first two rounds of the women's 200m. Both Simone Facey and Kerron Stewart finished second in their semi-finals. Stewart clocked 22.72 in her heat behind American Kaylin Whitney, 22.68. Facey clocked 22.64 behind Angela Tenorio of Ecuador, who won in 22.59.