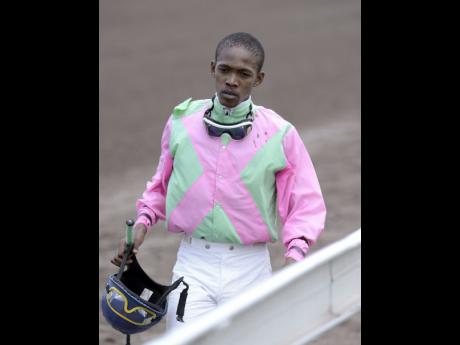 POPPY'S PRIDE, to be ridden by Jevanne Erwin for 14-time champion trainer Philip Feanny, should give Super-6 players a perfect start in tomorrow's opening race over 800 metres straight for maiden two-year-olds at Caymanas Park.

The maiden special event has attracted only six youngsters, but POPPY'S PRIDE has looked more advanced than any of his five opponents, galloping three furlongs in 36.2 at exercise on Wednesday morning. The son of Adore The Gold - Bunns Of Steel can be used as a banker following that promising third to BUBBLING KITTEN on his May 23 debut over 600 metres straight. He should lead home the fairly advanced debutante KIMMY'S TRAIN from the stables of in-form trainer Harry Parsard.

ROUGH PATRICK, a lightly-raced four-year-old colt who was a beaten favourite behind BLACK BOY over 1400 metres on July 8, will be a lot better for that pipeopener (fourth) and should recoup losses in the second race over a mile.

Trained by Colin Ferguson, the bay colt by Legal Process out of Sincerity was returning from a seven-month absence on July 8, and although beaten into fourth place, was only caught and regulated in the last furlong. He has worked fairly well and with connections calling up in-form jockey Paul Francis, ROUGH PATRICK should win from GEORGIAMYLOVE (trip now ideal) and NO MONEY FRIEND in a field of nine.

ANOTHER BULLET, who has looked well at exercise, should make a winning debut for title-chasing jockey Shane Ellis in the third race for maiden three-year-olds again over a mile. Trained by Everal Francis, the bay colt by Nasheet - Wisely Noted looked sharp in a recent exercise spin over seven furlongs, stopping the clock at 1:30.0 to beat stable-companion SHEBIZ, although he can expect worthwhile opposition from the trio of DIAMOND, FIERY PATH and SHIP LODE, ANOTHER BULLET, by virtue of his preparation, should get off the mark immediately in a field of 10.

The fourth race over 1500 metres on the Grooms' Association Day programme looks tailored for ALL FOR THE GLORY, who has been knocking at the door lately..

Trained by Andrew McDonald, the four-year-old son of Seeking The Glory has finished second in his last two races, going under in a driving to SEAL THE DEAL over 1400 metres in his previous race on July 8. He now has a glorious chance to release the maiden certificate especially with in-form claiming apprentice Sadiki Blake aboard.