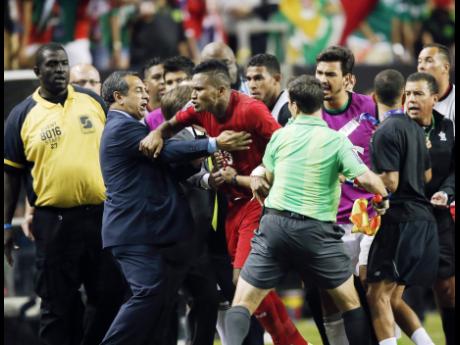 AP
Panama’s Erick Davis (15) is restrained as tempers flare during the second half of a CONCACAF Gold Cup football semi-final between Panama and Mexico on Wednesday in Atlanta. Mexico won 2-1 in extra time. 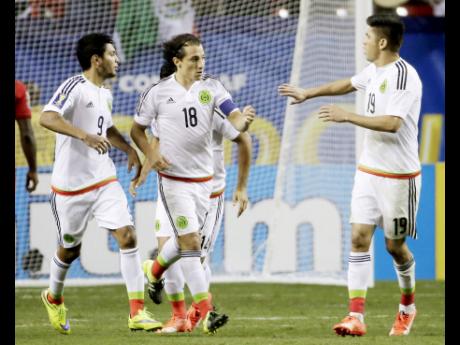 AP
Mexico’s Andres Guardado (centre) is congratulated by teammates Jesus Corona (left) and Oribe Peralta after he scored a penalty during the second half of a CONCACAF Gold Cup semi-final against Panama on Wednesday in Atlanta.
1
2

Panama's head coach Hernan Dario Gomez has slammed his side's controversial defeat to Mexico on Wednesday night as "utter robbery" and says the result has left a stain on football as a whole.

Panama, playing a man down from the 25th minute, led Mexico 1-0 until the 88th through captain Roman Torres' header before referee Mark Geiger awarded a controversial penalty, which tilted the balance of the CONCACAF Gold Cup semi-final at the Georgia Dome.

Torres took a tumble in the box and fell on top of the ball and Geiger astonishingly pointed to the spot.

"Logically, I hope that all the press understands that what I am experiencing right now is difficult and hard. The press, more than us, are aware that things did not function well, in the legal way. Panama made an outstanding effort with ten men," a clearly dejected Gomez told a media conference.

"I have been managing teams since 1987, and this is the first time that I experience this. With a team well worked, with athletes desiring to give their country another Gold Cup final, with a press that has accompanied and helped us out.

"If it was up to me, I could say 'I do not want to continue in football anymore', because that was horrible. It was an utter robbery."

After an 11-minute stoppage, during which Panama protested the call, scuffles broke out and beverages were tossed on the field by spectators, Andres Guardado converted the spot kick to draw Mexico level.

The Mexican Eindhoven forward then found the winner, also from the spot, in the first period of added extra time.

Gomez said the refereeing decisions had ruined an excellent game and had ultimately hurt the sport.

"There were two great teams on the pitch tonight, each team exhibiting good styles. The Mexican players or the team has nothing to do with what happened," Gomez stressed.

"However, I value more the capacity of the Panamanian players for they played a tactical game against an immense rival with good possession of the ball, that is Mexico. And Panama held their ground, and at times, it was able to attack, and then we are up 1-0.

"And then, on 88th minute, the penalty happened. You cannot determine a final in that manner. You can't be serious. This has damaged not only football in general but the upcoming Gold Cup final. It ruins the beauty of the tournament."

Geiger had earlier sent off Luis Tejada for a hand to the face of Francisco Rodriguez as the two battled for a ball. The call was another contentious one that resulted in vociferous protests from the Panamaian players.

The defeat saw Panama miss out on their second successive Gold Cup final.