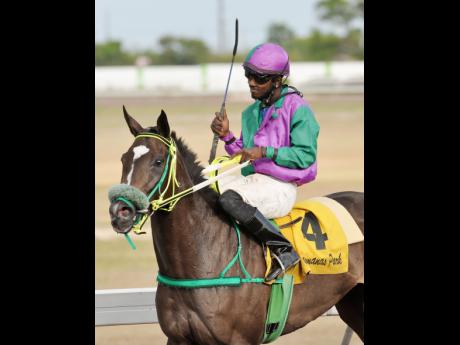 File
file Robert Halledeen (above) will be aboard COUNTRY TRAIN

The consistent COUNTRY TRAIN should lead home ROCK UNION in the annual renewal of the Grooms' Association Trophy race over the straight-five course at Caymanas Park today.

Confined to horses from the $350,000-$300,000 claiming spread, the race originally had 13 nominees at the overnight stage on Wednesday, but 12 will now face the starter after one of the top contenders, EL PODEROSO, drowned at sea on Thursday morning.

COUNTRY TRAIN and ROCK UNION, both winners last time out, have the best form to recommend and should take it down to the wire.

The five-year-old gelding ROCK UNION has won his last two races over the straight, leading home subsequent winner AUNT HILDA by just over two lengths on June 13. He was claimed out of that race from trainer Anthony 'Baba' Nunes by Colin Ferguson and although stepping up in class today, this will not deter him.

Prior to his last race, he beat $350,000 claimers over the course on May 23 in a sub-minute time and reporting in good nick for this race, can prove equal to the task with the sparingly used but experienced jockey Paul Ramsay aboard.

Despite his strong claims, preference is for the Stedman Curtis-trained COUNTRY TRAIN, who has won three of her last four races.

The five-year-old mare by Image Maker out of Storm Within looked much improved when slamming subsequent winner NEW KINGSTON by almost five lengths over the course on May 6, this on a $400,000 claiming tag in the good time of 1:00.0. And last time out she was at it again, winning by five lengths over the round-five course on July 8 when claimed by Stedman Curtis.

She reports in fine fettle in a bid for this trophy and with title-chasing jockey Robert Halledeen taking the ride from one of his favourite trainers, she will not be easily denied.

COUNTRY TRAIN has good speed and in light of this, should gallop on to the main track ahead of AUNT HILDA, SMOKIN MAN and ROCK UNION, keeping on strongly to beat the latter in decisive fashion.

Also, on the 10-race programme is a highly-competitive open allowance race over a mile which brings together the down in class horses PETE'SWILDONE and ALL CORRECT, as well as the recent winners TIMFORARMS, PHINEAS, FRANFIELD and MILITARY MOVE in a field of nine.

One of the down in class horses should capture this event and I select ALL CORRECT to get the better of PETE'SWILDONE.