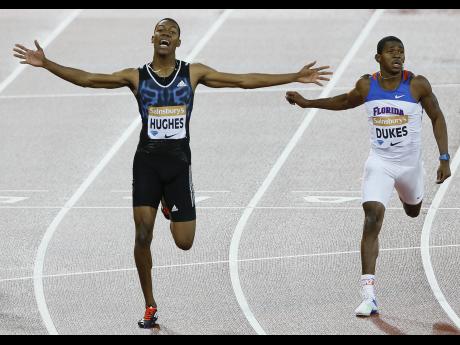 AP
Zharnel Hughes (left) of Britain celebrates as he wins the men's 200m race ahead of Dedric Dukes of the USA during the Diamond League athletics meeting at the Olympic Stadium in the Queen Elizabeth Olympic Park in London yesterday.

Zharnel Hughes is not too keen on the idea of swapping Jamaica's sunshine for the wet and chilly British weather, but the Anguilla-born sprinter, who now represents Great Britain, felt his 200-metre win at yesterday's Sainsbury's Anniversary Games was a special experience for him.

Hughes, who trains at the University of the West Indies with the Racers Track Club, came off the curve in touching distance of American Dedric Dukes but was too strong, showing impressive resilience to hold off his competitor to cross the line in a personal-best 20.05 seconds with arms stretched wide.

"It was great competing here (London Olympic Stadium) and I look forward to coming back," Hughes said. "It was something special for me. I told myself that I was going to give it my best and ensure that the crowd is satisfied and I came out and did it."

"I got the win and I'm very happy about that. What else could I ask for? I thank God," Hughes added.

The former Kingston College standout, the 2014 winner in Class One 100m at the Boys and Girls' Athletics Championships, shared that he is confident that he can now break the 20 seconds barrier and says his target for the World Championships is to finish in a medal position.

"I definitely think I have announced myself to the UK public. I changed my mindset in training. I told myself I had to come out and perform, and to keep dropping my personal best like this is a great feeling," Hughes said. "For the World Championships, the target is to definitely get a medal."

"The weather, to be honest, I was looking outside my window at the hotel before the meet and was saying it would pour. Just before I came out I saw it had cleared up but it was still a bit chilly, but I got the win, so no complaints," said Hughes before stating his preference for the Caribbean climate.