'I am always number one' 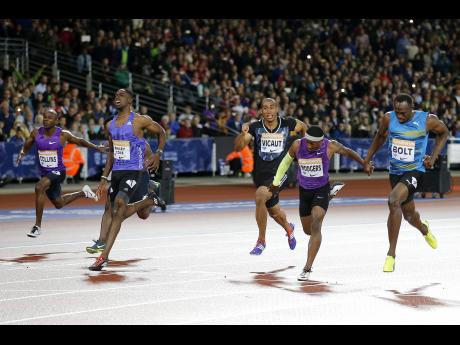 AP
Jamaica's Usain Bolt (right) crosses the finish line in 9.87 seconds to win the 100 metres at the Diamond League athletics meeting at the Olympic Stadium in London yesterday. American Mike Rodgers (second right) was second in 9.90 while Jamaica Kemar Bailey-Cole (second left) was third in 9.92.

He came to breathe life into a stadium that many consider a White Elephant these days, but in the end, Usain Bolt's two 100-metre runs at yesterday's Sainsbury's Anniversary Games, had Lazarus-like effects on his own season, as he left a soaking London Olympic Stadium in burning excitement.

Two races, two wins, twice the clock showed 9.87, as track and field's poster boy crossed the line and perhaps wiped the smile off his rivals' faces in front of nearly 50,000 pro-Bolt fans.

Even worse - or better, depending on your perspective - Bolt, who had not gone this fast since the Brussells Diamond League in September 2013, seems to have more, shaking his head after the second of his two assignments, disappointed that he did not post a faster time. You would think that a man who has been struggling the way he has since the start of the season would throw a party after clocking 9.87 twice within an hour, in negative wind (-0.8) and wet and chilly conditions.

Still, the world 100m and 200m Olympic and world champion feels his triumphant return to London - and form, is more a message to himself - even if he did have something to say to those with gold medal ambitions for next month's World Championships in Beijing.

"I was never number two. I am still number one. So, that's the plan until I retire," Bolt affirmed.

"This does help my confidence going into the World Championships and it helps that I can see the results after putting in the work on the track. So it looks good," added Bolt.

Like he did in the heat a bit earlier American Mike Rodgers was second, clocking 9.90 with another Jamaican Kemar Bailey-Cole, the Commonwealth champion, taking third in the fastest time he has ever registered, 9.92. It did seem to come at a price, however, with the towering sprinter suffering cramp in both legs. Nesta Carter finished seventh in 10.08.

Bolt, who came into the meet with 62 athletes running faster than his 10.12 posted earlier this year, is now the sixth fastest in the world, but there's no doubting where he intends to be by the time he leaves Beijing.

The sprinter says he will talk to his coach about whether or not another race is necessary with the possibility of an appearance at the upcoming Stockholm Diamond League. He also noted that he will probably pay another visit to his doctor Hans-Wilhelm M¸ller-Wohlfahrt to ensure everything is in order.

Kimberly Williams, 14.15m was second in the women's triple jump after surrendering the lead to Olga Rypakova (Kazakhstan), whose 14.33m win took her to second place in the diamond race with Dana Veldakova (Slovakia), 13.66m taking third.

In the first track event of the evening, the women's 400 metres, Stephenie-Ann McPherson was the best-placed Jamaican, finishing third in 50.91 with American Natasha Hastings, holding off country-woman Francena McCorory, 50.67, after running a season best 50.24.

It was another tough day in the office for world leading discus man Jason Morgan, who fouled twice, settling with a 59.60m mark, which left him languishing in ninth position.

Elaine Thompson is the only Jamaican in action on today's final day of the two-day meet. She competes in the 200m at 9:58 a.m.