Pan Am Games silver for Dwyer, Facey gets bronze 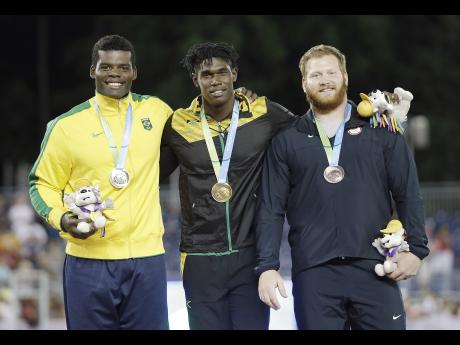 AP
Gold medallist Fedrick Dacres of Jamaica (centre), silver medalist Ronald Juliao of Brazil (left), and bronze medallist Russ Winger of the United States pose for photographers during the medal ceremony for the men’s discus at the Pan Am Games on Thursday. 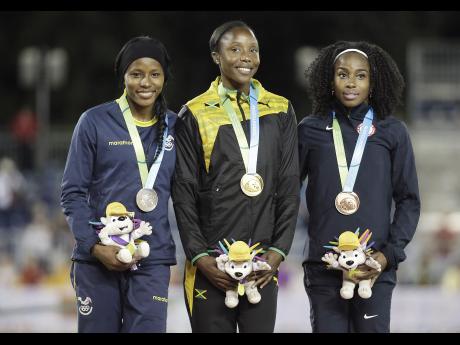 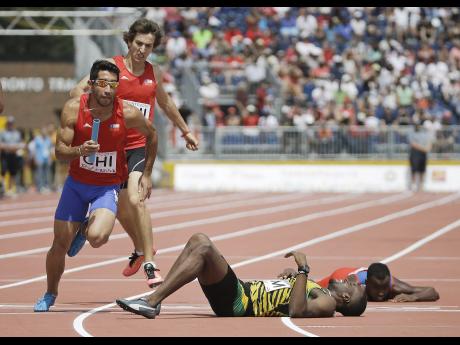 AP
Alfredo Sepulveda (left) of Chile runs past Javere Bell (centre) of Jamaica and Joel Mejía (right) of the Dominican Republic during the 4x400m semi-finals at the Pan American Games yesterday. Mejía fell while handing over the baton and impeded Bell after the Jamaican had handed over the baton. 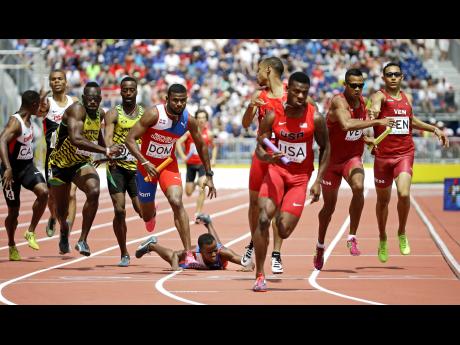 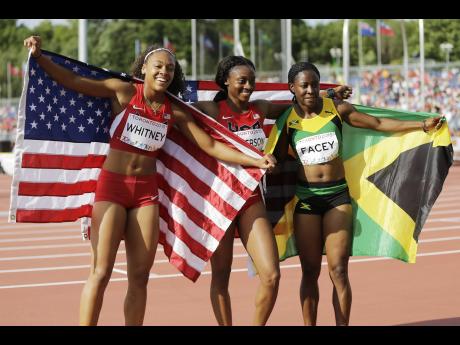 AP
From left: USA’s Kaylin Whitney, USA’s Kyra Jefferson and Jamaica’s Simone Facey celebrate after the final of the women’s 200 metres at the Pan Am Games in Toronto, Canada, yesterday. Whitney won the gold medal; Jefferson, the silver; and Facey, the bronze. 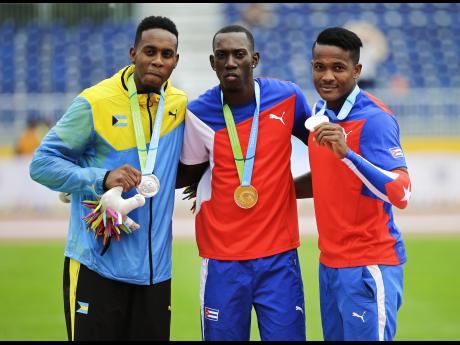 Rasheed Dwyer picked up silver in the men's 200 metres while Simone Facey captured the bronze in the women's equivalent. With just one day of competition to go, the country's medal tally stands at seven overall - three gold, two silver and two bronze. The country has six medals in track and field and is fourth overall behind the United States, Canada and Cuba.

Facey, the silver medallist two years ago in Mexico, had to settle for bronze this time around. She clocked 22.74 as teammate Kerron Stewart finished a disappointing fifth in a pedestrian 23.07.

The United States were one, two. Seventeen-year-old Kaylin Whitney captured the gold medal after winning in 22.65 seconds ahead of teammate Kyra Jefferson who finished second in 22.72.

Following his record-breaking run on Thursday's third day of competition, Jamaica's Rasheed Dwyer went into the men's 200m final as the howling favourite to capture the gold medal. Drawn in lane four, Dwyer came off the curve into the lead and, with less than 50 metres to go, looked all over the winner. However, this was not to be as Dwyer lost his form with less than 20m and 100m champion Andre DeGrasse, spurred on by his home-crowd supporters, came storming through in lane eight to score a close win in a bang-up finish. DeGrasse clocked a personal best 19.86 for the gold as he completed the sprint double.

In a very tight photo finish, both Dwyer and Alonso Edwards of Panama were

credited with the same time of 19.9, but it was the Jamaican who was given the nod for silver.

Competing in his first senior meet, last year's world junior 110 metres hurdles silver medallist, Tyler Mason, had no luck in the men's 110m hurdles final. Mason, who went into the final as the fourth-fastest qualifier after clocking 13.40 seconds in the preliminary round earlier in the day, could only manage seventh in 13.69.

seconds. He erased the old mark of 13.10 set by Cuba's Dayron Robles two years ago in Guadalajara, Mexico. Miguel Francis of Trinidad and Tobago finished second in a personal best 13.17 while it was also a personal best for Shane Braithwaite of Barbados who captured the bronze medal in 13.21.

The country will be hoping for more silverware today when track and field comes to an end. Both male and female 4x400m teams finished second in their semi-finals to advance to today's final. The women clocked 3:30.29 , behind winners the United States, 3:28.15.

The men also finished behind the United States in 3:03.72. The Americans clocked 3:02.99. The semi-finals of both the men's and women's 4x100m were scheduled for last night.