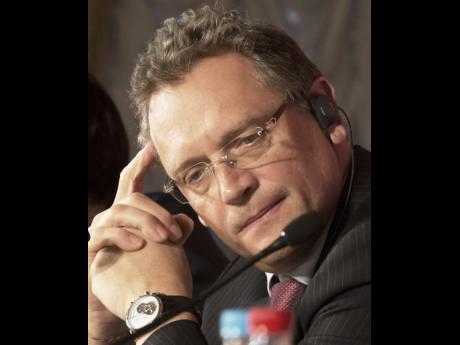 Valcke, however, said yesterday it is not because he is responsible for any wrongdoing in the crisis that has shaken the governing body.

The Frenchman has served for eight years as the top administrator at FIFA, which is at the centre of criminal investigations by American and Swiss authorities.

The weight of the corruption probes and sponsors' concerns led to Blatter announcing June 2 he will leave FIFA, a move that came four days after he was re-elected to serve a fifth, four-year term. A successor to Blatter, who has headed the governing body since 1998, is to be elected on February 26.

"Whoever becomes the FIFA president should have a new secretary general because it's the most important relationship for the organisation," Valcke said in St Petersburg ahead of the 2018 World Cup qualifying draw.

Rain, no play in Bangladesh

Rain washed out the entire fourth day of the first Test between Bangladesh and South Africa yesterday, leaving the prospect of a result bleak.

For the first time, Bangladesh will play a fifth day of a Test against South Africa, having lost all previous eight Tests inside four days.

Officials said there will be no attempt on the fifth day, Saturday, to make up for lost time.

South Africa are 61-0 in their second innings, trailing by 17 runs, after Bangladesh made their highest total against the Proteas of 326 in their first innings.

England to face Pakistan in UAE

England's away series against Pakistan in the United Arab Emirates has been finalised.

The England and Wales Cricket Board confirmed Thursday that the series will include three Tests, four one-day internationals and three Twenty20s in October and November.

The first Test will take place in Abu Dhabi's Zayed Cricket Stadium between October 13-17, with the second at the Dubai Cricket Stadium starting five days later and the final Test at Sharjah Cricket Club from November 1-5.

Pakistan jumped to No. 3 in Test rankings after defeating Sri Lanka 2-1 in the series last month while they also took an unbeatable 3-1 lead in the five-match ODI series after beating Sri Lanka by seven wickets on Wednesday in Colombo.

While England lost the Test series in 2012, they went on to beat Pakistan both in the one-day and Twenty20 series.

Bautista Agut saved all four break points he faced, including three when the 18-year-old Coric was trailing 3-5 with a chance to stay in the first set.

It's the fourth semi-final of the season for Bautista Agut. The Spaniard lost all three semi-finals so far in 2015 - in Chennai, Marseille and Munich.

He will face Jo„o Sousa who saved a match point and upset fifth-seeded Fabio Fognini of Italy 6-2, 3-6, 7-6 (6) to advance to the semi-finals - his third this year. Sousa reached the final in Geneva in May.