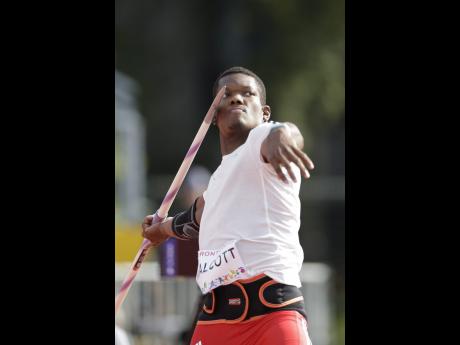 AP
Trinidad and Tobago’s Keshorn Walcott competes in the javelin throw final during the Pan American Games yesterday in Toronto. Walcott won gold with a throw of 83.27 metres.

Though his winning mark of 83.27 metres was way short of his best, the 22-year-old still managed to walk away with yet another major title, adding to the one he landed three years ago at the London 2012 Olympics.

Walcott found his winning throw in the second round, leaving the remainder of the field - which included countryman Shakeil Waithe who finished last - battling to play catch-up.

Two weeks ago, Walcott threw a personal-best 90.16 to smash the T&T national record and win at the Lausanne Diamond League meet.

The mark was the second best in the world this year behind Kenyan Julius Yego's 91.39m.

Pichardo measured a distance of 17.54 metres while Sands, an Olympic and World Championship bronze medallist, jumped 16.99.

Cuban Ednia Caballero, meanwhile, picked up gold in the women's discus with a throw of 65.39m with fellow national Yaime Perez taking silver with 64.99.