Watson driving Boyz forward with his 'A' game 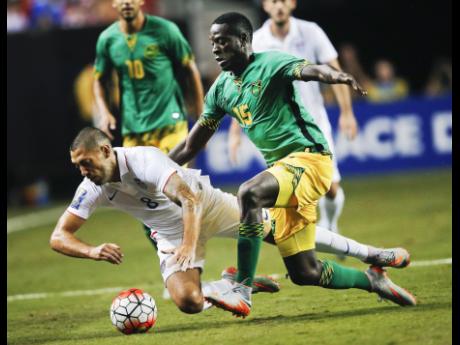 AP
AP Jamaica's Je-Vaughn Watson (right) and United States Clint Dempsey compete for the ball during the first half of a CONCACAF Gold Cup semi-final on Wednesday in Atlanta. Jamaica won 2-1.

JE-VAUGHN WATSON has embraced his role as one of the key players for Jamaica at the CONCACAF Gold Cup.

The central midfielder is a senior member in the Jamaica set-up, who has been covering a lot of ground while playing a two-way role at the tournament, which climaxes with a clash against Mexico in the final at Lincoln Financial Field in Philadelphia tomorrow.

"Playing for the country, that alone is a big motivation. To put on the green, gold and black that gives us a big motivation for a big tournament," he said. "Playing in the Gold Cup against quality teams like the United States you've to bring your 'A' game."

Jamaica's place in the final is historical, as they had never been farther than the semis - in 1993 when they finished joint third and 1998 when they placed fourth.

On Wednesday at the Georgia Dome in Atlanta, that stat went out the window, with Watson, who his teammates call 'Hacker', working off his socks in a 2-1 victory for the Jamaicans.

"Before the game the players said 'Je-Vaughn you didn't play the last game. We know your potential, we know what you can do, anytime you play the team plays well'," noting their call for him to step up to the plate.

"It means a lot to me to know that you're playing for your country and you're a vital player in the team and guys look forward to you - players who can give a lot of energy for the team, whether in offence or defence. That's not a pressure. I take it as a blessing to represent your country like that.

"We had one of the best games of the tournament. We beat a good US team that everybody wanted to win the game. But, we went out there and showed a lot of guts and determination and we came away winners.

"I feel so good I didn't even sleep last night (Wednesday). I felt like I was dreaming. But at the end of the day we knew we were a better team than them. We knew that if we went out there and played then we would give a good game," he added.