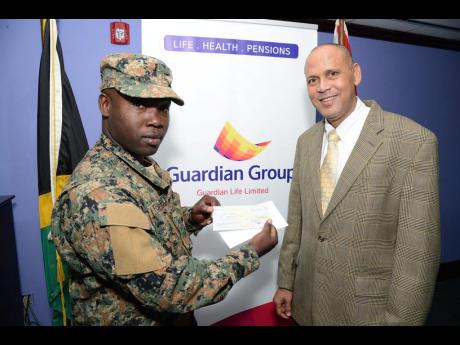 Contributed
Contributed<\n>Private Javed Fisher shows off his US$1,000 prize cheque from Guardian Group for having taken a one-handed catch off a six during the Jamaica Tallawahs versus St Lucia Zouks match at Sabina Park on July 7. Fisher will travel to Trinidad for the Hero CPL final where he stands a chance of winning up to US$1 million if he can repeat his feat. 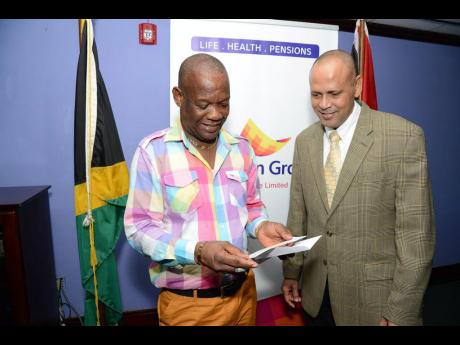 Contributed
Contributed<\n>Eric Hosin (right), president  Guardian Life, looks on as Cecil Patterson, one of the Jamaican winners in the Guardian Group Hero CPL Catch promotion, inspects his US$1,000 prize cheque. Patterson was the second spectator to take a clean one-handed catch during the Jamaica Tallawahs versus Trinidad and Tobago Red Steel match at Sabina Park on July 9.
1
2

Scotia 'A' General Accident in BH

Defending champions Scotiabank 'A' and former champions General Accident, both unbeaten this season, will contest the final of the Business House Open League this evening at Leila Robinson Courts starting at 7:30 p.m.

With both teams parading a number of former national players, the match promises to be an exciting and closely contested affair. General Accident, champions in 2013 but opted to take a break from the competition last year, easily disposed of Scotiabank 'B' in one semi-final, while Scotia 'A' brushed aside GraceKennedy in the other semi-final.

Scotia 'A' will be banking on top players Nauda Brown (captain), Marsha Murphy-Dawkins, Kameika Sherwood and Sateva Taylor-Brown to carry the fight to their opponents. General Accident, on the other hand, will counter with Nadine Bryan (captain), Margaret Byfield-Lawrence, Samantha Mundle and Sasha-Gaye Lynch.

Winston Nevers is the coach for Scotia 'A', while former national player and coach Oberon Pitterson-Nattie will guide the General Accident team.

The Gleaner vs UWI in BH football action

The Gleaner, who are currently in second place with 12 points from six matches, will oppose bottom of the tables UWI at Alpha starting at 4 p.m., while GraceKennedy are up against Norman Manley International Airport at the Edward Seaga Sports Complex, also at 4 p.m.

The match was pretty close for most of the way with both teams locked at 60-60 early in the second half. However, Kingston Wharves soon asserted their authority to win convincingly.

For Campari, it was a disappointing end to a good season. They also contested the KO final only to be beaten by The Gleaner.

Kingston Wharves failed in their bid to take the double, having lost in the first round of the KO competition. However, they were unbeaten in the league.

Romaine Senior slammed an impressive 154 while O'Gilvie struck 149 not out to pilot their team to a mammoth 368-4 in 30 overs. In reply, Waterford were routed for 58. Daryl Williams took 4-8 and Kishawn Graham 2-9 as Greater Portmore won by a massive 310 runs. At Hamilton Gardens, Portsmouth defeated Hamilton Gardens by 59 runs. Scores: Portsmouth 212 all out. Shava Christie 88 and Sahim Simms 71 not out. Hamilton Gardens 153 all out; Jermone Hamilton 69; Kemani Wilson 23. Alex Hinds (3-18) and Shamar Davis (3-29).

The competition was officially opened by member of parliament for East Central St Catherine, Ornaldo Brown, at the newly renovated field at Hamilton Gardens.

Some eights teams are down to compete.

In his presentation, MP Fagan commended the teams for their participation and urged them to play with their community in mind as a portion of the prize money will go to the community. The teams are playing for prizes that range from first place $60,000; second $30,000; third $15,000 and fourth $10,000. The competition runs for four months.

Cumberland played an All Stars team in a exhibition match to signal the start of the league. Official games will start tomorrow at 1 p.m.

Power of Faith 'B' clinched the final semi-final spot after a commanding 20-9 victory over Elim Open Bible in the final preliminary match at the PFM Sports Complex, 10c Dawkins Drive, in the PFM Church Netball League last Saturday.

PFM 'B' will today take on their sister team PFM 'A' at 10 a.m.; while at 10:55 a.m. it's Faith Temple New Testament vs Equator Faith Mission. Both games will be played at the venue above.

Portmore United, clipped Newland 2-1 to maintain their lead in Zone B of the St Catherine FA Under-20 Football League recently.

Clarendon and St Catherine have emerged winners of the South Central Confed Youth Leagues. The competitions have been sponsored by Juici Patties for the past 29 years.

Clarendon won the Under-13 while the Under-15 title went to St Catherine. Clarendon completed their dominance of the Under-13 competition with a spanking 3-0 win over St Elizabeth. They were already confirmed champions from the previous round and their final tally of 14 points was six higher than second placed St Catherine.

St Catherine's win in the Under-15 competition was even more overwhelming as they ended the competition on 16 points. The nearest challengers were outgoing champions Manchester who mined seven points. St Catherine ended their campaign with a 1-0 win over Manchester at Kirkvine.

As many as ten pro shooters from the Mandeville-based Manchester Rifle and Pistol Club (MRPC) will journey this morning to the Jamaica Rifle Association (JRA) headquarters on Mountain View Avenue in Kingston to participate in the Jamaica Cup.

The pistol tournament is considered an early qualifier to the next International World Shoot and will field international competitors as well as the best local shooters. The tournament will take the form of a two-day challenge comprising sixteen stages approved by the world body for International Practical Shooting. Eight stages will be hosted today at the JRA and another eight will be completed tomorrow at the Woodleigh Range in Clarendon.

Heading Manchester's charge will be Orville Henriques who was the top-ranked local based on performances at challenge and club matches at the JRA and the Manchester Rifle and Pistol Club. Henriques, however, has since lost to compatriots Andy Yapp and Ronald Brown Jr in two international matches hosted in the United States. Hence, this weekend's match should go a far in determining who is best.

Hayes' 45-43 win over Jamalco in the preliminaries had opened expectations of a tight battle. However, veteran shooter Elaine Davis settled Jamalco early with near 100 per cent accuracy and the contest never materialised. In the hour-long game, Jamalco led 16-10, 30-18 and by the third quarter when Davis rested to give younger shooters a go, the scoreline was an unassailable 45-26.

Jamalco's latest championship win at the parish level, was their 23rd in 26 seasons. It was also their ninth consecutive one since losing to Windalco ten years ago. Windalco has since been rebranded Cable Pro. The latter finished fourth after losing 36-13 to Nemac Transport.

While Davis's goal-shooting success laid the platform, the major kudos went to the performance of Kameka Sherwood as goalkeeper. Sherwood, a former St Hugh's High star, was later voted MVP of the finals.

All four preliminary zones of the Clarendon-based Jamalco Football League are taking shape. Mocho who completed a 5-0 demolition of Juventus last week, have already qualified from Zone One with six points from two games. With just one game to be completed, the trio of Raymonds (three points), Juventus (two) and Railroad (two) will decide who emerges as the second qualifiers.

Invincible and Wembley lead the charge in Zone Two with four points each after two games. Savannah are next with three points but only have one remaining encounter. Two other teams, Top Halse Hall and Harmons, have only one point each but they have two matches in hand.

New Bowens are clear leaders in Zone Three and are unbeaten with six points from two games. Next are Top Hill with three points but they have only completed one of their three scheduled games. Napoli who won their midweek encounter 2-0 against Hunts Pen, are already sure of qualification from Zone Four having mined six points from two games. Port who are on four points, can still advance if they avoid defeat in their final game.

The second staging of the Knox Football Tournament will be over two days starting Thursday, July 30 at Brook's Park in Mandeville, Manchester.

The tournament is the brainchild of Courtney Jackson, coach of the Knox College daCosta Cup team. Jackson has had success at the schoolboy level having coached Edwin Allen to the semi-finals and Spaldings High to the finals in 2007. The tournament caters for schools preparing for the upcoming daCosta and Manning Cups schoolboys football season. The six confirmed participating teams are Wolmer's Boys, Holy Trinity, Glenmuir, St James High, Edwin Allen and hosts Knox. Glenmuir won the inaugural tournament last year.

The teams will be competing for the Clifton "Dove" Williams trophy. Cash awards will be given to the top three teams while individual awards will be presented to the most valuable player, best midfielder, best defender, top goalscorer and most outstanding goalkeeper.