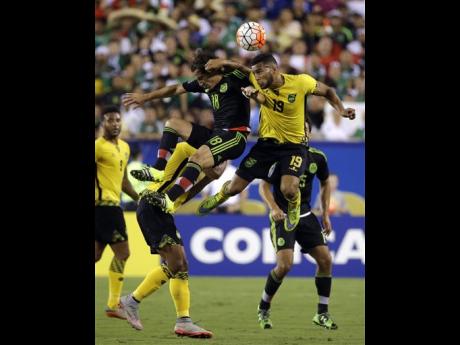 Jamaica's Reggae Boyz failed in their bid to win this year's CONCACAF Gold Cup tournament after being beaten 3-1 by Mexico in the final at the Lincoln Financial Field in Philadelphia this evening.

Andres Guardado made it 1-0 in the 31st minute to send the Mexicans into the half-time break in the lead.

As the play resumed, Jesus Corona 47th made it 2-0 before Jamaica's Michael Hector made a dreadful defensive blunder for Oribe Peralta to score in the 61st minute and help the Mexicans register their seventh win of the region's top football tournament.

Substitute, Darren Mattocks, scored the consolation goal for the Reggae Boyz in the 80th minute.

The Reggae Boyz pair of captain, Rodolph Austin, and JeVaughn Watson each picked up a yellow card as well as the Mexican duo of Diego Reyes and Jesus Duenas.

The Jamaicans began the match confidently, as they created a number of clear-cut chances, which the strikers failed to covert.

The Reggae Boyz were then pegged back when Guardado latched onto a cross from his teammate to fire home from point blanked range.