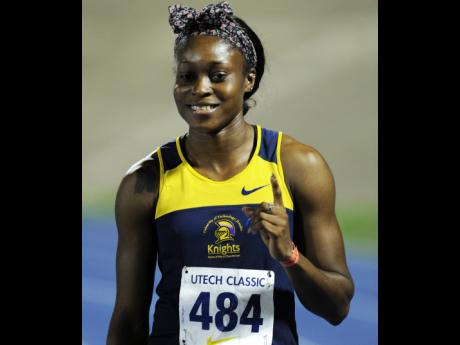 A glittering new personal best and another clear message that she is more than ready to tango with the best of them.

National 200m champion Elaine Thompson was a nervous wreck as she stood on the line, waiting to compete for the first time in a 200m on the Diamond League circuit. In fact, it was her first time running the 200m outside of Jamaica this season and only the second time doing so in her career.

"I was really nervous, I just wanted the gun to go off!" she shared, stooping over and catching her breath after a 22.10-second win in a rocking London Olympic Stadium at the Sainsbury's Anniversary Games yesterday.

There has been much curiosity around the fast and fast-rising World Championships-bound Jamaican sprinter after a season that has seen her clock 10.84 over 100m and before yesterday's, run 22.37 in the 200m.

It was a timely boost of confidence for the young sprinter, who now has the fourth-fastest time in the world this year, and with the World Championships in Beijing set to be her next assignment, it's unlikely that too many persons will be doubting her after this.

"I am really excited," she exclaimed. "I came off the corner in first place, I was really determined to execute the rest of the race well and I came out victorious, so I'm really happy for that."

The American pair of Torie Bowie and Candyce McGrone - who is the second fastest woman this year with a 22.08 clocking - tested the Jamaican at the top of the straight but had no answer as the 23-year-old found another gear with Bowie crossing the line in second place in 22.32 ahead of McGrone, 22.70.

"It's a big confidence booster for me and I have to thank God because I have trained really hard for this and wanted to come out here and do my best, so I'm happy about that," Thompson smiled. "My focus was really to come off the corner as best as possible and taking it from there."