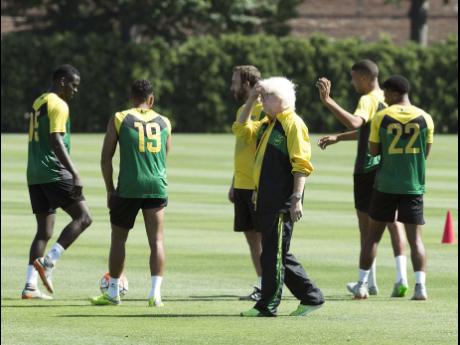 THE Reggae Boyz are brimming with confidence for their historic CONCACAF Gold Cup football final against Mexico today at 7:30 p.m. (6:30 p.m. Jamaica time).

Winfried Schäfer has built a team full of strength, belief and unity on and off the field that wants to cap their progress with an unprecedented win.

"The players have to play football with concentration, with winning mentality," Schäfer said.

The Caribbean champions are unbeaten at the tournament, winning all their matches after their 2-2 opening game fixture against Costa Rica nearly three weeks ago. Since that game, they have conceded only one goal - in the semi-finals.

Such has been their defence, built solidly throughout the team from back when Ryan Thompson replaced Dwayne Miller, because he got injured in the Canada match.

Miller had himself replaced Duwayne Kerr, who had been at the Copa America, until he made one bizarre error that cost a goal and 1-0 loss against Paraguay.

Thompson's spill cost the US goal at Georgia Dome and with Miller and Andre Blake in waiting that may be one of the biggest decisions for the coach and his staff.

Schäfer has also moved quickly to fix other positions when he thinks things are not working. It's his way. It's the way he wants his players to be, always thinking, always searching for ways to improve.

In matches too, like in the El Salvador group match when the Central Americans were running roughshod over their opponents, Schäfer made changes in personnel and team shape and the problems were fixed.

"We've played eight matches, everybody knows in this team what they have to do," Schäfer said. "When a worker works with heart, he has luck."

As they've done in matches before, he noted that Jamaica's shape for the final would be influenced by decisions to stifle Mexico, who are searching for their seventh title in this the 13th Gold Cup.

In their last 10 matchups between the countries, dating back to 1997, Mexico won five and Jamaica two. Recent contests, however, paint an even picture, with Jamaica losing 1-0 and tying 0-0 in 2013 World Cup qualifying, when Jamaica secured its first tie in Mexico City.

Other firsts this past week speak louder on Jamaica's growth, which has coincided with Schäfer's coming around the very 2013 period.

" ... Two years down the line and everybody's sort of comfortable with each other, everybody knows the dynamics of the group and it works very well," said influential midfielder Joel 'Jobi' McAnuff.

Key to Jamaica's victory charge will be their trusted defending. The goalkeepers have been excellent, barring the semi-final glitch. Those in front have been solid, despite forced changes through Jermaine Taylor's injury and Alvas Powell walking out on his country to lessen the options.

Michael Hector, who was strong at Copa, has filled the void left by Taylor with a mind good enough to read the game while working in tandem with sturdy Wes Morgan. Kemar Lawrence has proved key with his long throwing, which has set up two goals, a set play weapon also possessed by Adrian Mariappa, who has also been sound on the other flank.

Key to everything, going both ways, are central midfielders Rodolph Austin and Je-Vaughn Watson, along with McAnuff and Garath McCleary, whose two goals tie with main striker Giles Barnes in the eight goals netted by the team.

All round, Jamaica's Boyz match up well against Mexico who have hosted the World Cup Finals twice and been a staple for CONCACAF at the sport's big dance.

However, they have not been as smooth in all areas this championship.

While they have been solid on their feet in attack, by netting 13 goals, Mexico have been wobbly in defence, where they have conceded five times.

Additionally, for two consecutive matches in the knockout stage, the Mexicans have profited from bad officiating to get decisive penalties against Costa Rica, who they beat 1-0, then against Panama, which suffered in a hot-tempered semi-final by conceding two questionable penalties and a red card.