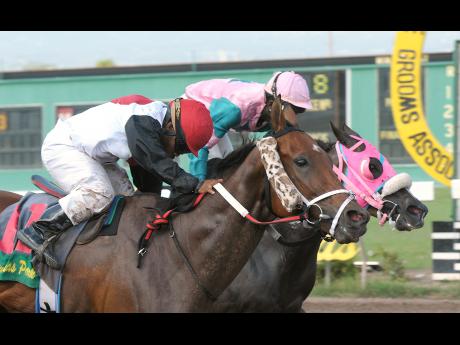 NUH NEX (left) with Prince Holder aboard winning the Grooms' Association Trophy by a head from COUNTRY TRAIN (Robert Halledeen) at Caymanas Park on Saturday.

With punters installing the America 3-y-o colt SUPERIOR QUALITY, a red hot favourite in a field of seven, SIR FREDERICK broke well to race in touch early stages, but fell back approaching the half mile as TOOTING KAT (6-1) led at a fast clip from SUPERIOR QUALITY and AMICABLE (8-1).

TOOTING KAT and the chasing SUPERIOR QUALITY came under pressure approaching the distance, but by then SIR FREDERICK had found his best strides. He disposed of TOOTING KAT early in the last furlong and was driven out to win by two lengths from rank outsider RUM PUNCH (77-1), who after missing the break and outpaced in last position, closed rapidly to beat the well-backed BUTLER CABIN (5-2) by a length for second with SUPERIOR QUALITY fading into fourth.

Owned and trained by Howard McLeod and bred by Trevor James, SIR FREDERICK, a 5-y-o bay horse by Storm Craft out of Brenda's Song, was notching his fifth win from 26 starts lifetime.

The day's co-feature for the Master Blaster Trophy over the straight five course, saw another 8-1 chance, AGAKHAN, with Richard Nunan riding for owner/trainer Deon Facey, storming through late on the stands' side to win by 1-1/4 lengths from BAD BOY JUSTIN. The 6-5 favourite GOLDEN BULLET with leading jockey Shane Ellis aboard, disappointed in finishing out of the frame.

Title-chasing jockeys Ellis and Robert Halledeen shared the riding honours with two winners each. Ellis emerged the performer of the month in the jockeys' category with eight winners.