Look at the positives, says Barnes 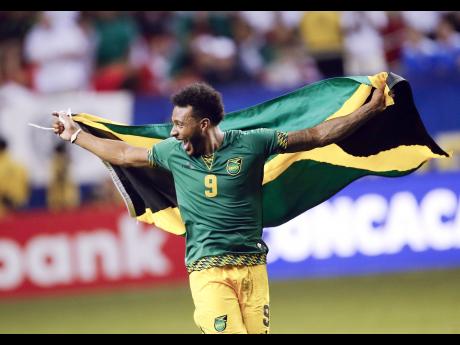 JAMAICA'S striker, Giles Barnes, says his compatriots should view their accomplishments at the CONCACAF Gold Cup in a positive manner.

"It's just incredible for the whole country. They've got something in football they can be proud of," he said of their historic achievement.

The Reggae Boyz became the first Caribbean nation to qualify for the Confederation's championship final.

However, in that game on Sunday night at Lincoln Financial Field here, they were beaten 3-1 by Mexico, who lifted the title for an unprecedented seventh time in 13 competitions.

"Definitely no, not the result we wanted," Barnes shared. "There were a lot of tears in the locker room after, but it's not just tears of upset, it's tears of pride. I think we've done so much for Jamaican football.

"We're gonna take great heart from it. Congratulations to Mexico as well, they were really good in the second half, and they deserved it on the day. They kept the ball very well ... I think it was unfortunate, the first goal, it knocked the wind out of our sails a little, but we've got that never-say-die attitude, and we just fought to the end," Barnes admitted.

Barnes was full of praise for Winfried Sch‰fer.

"He listens to his players. He actually gave me a lot of jokes; even with his broken English he's pretty funny," Barnes said of the 65-year-old German. "He's very knowledgeable about the game as well, and credit to him for getting us altogether on the same page, and I hope he's the coach for awhile."