ATHLETICS: Fraser-Pryce as hungry as ever 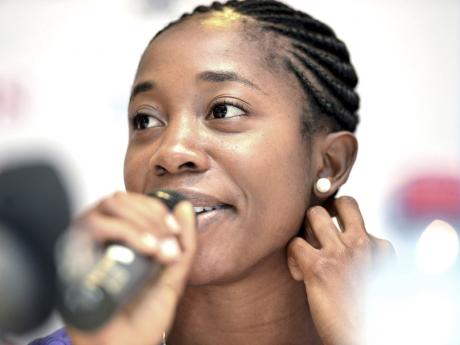 Shelly-Ann Fraser-Pryce ... “I’ve been training hard since the Paris race. I’ve been lifting weights and running over 200m which I don’t like!

STOCKHOLM, Sweden:
Anyone who thought that Shelly-Ann Fraser-Pryce was content to relax on her many laurels would be mistaken.

The current Olympic and world 100m champion, in Stockholm, Sweden, for the BAUHAUS athletics meeting which forms a segment of the IAAF’s Diamond League series on Thursday, has declared that she is as hungry as ever.

If Fraser-Pryce’s last Diamond League meeting race in Paris is anything to go by, the 28-year-old is in great shape with the World Athletics Championships in Beijing less than a month away.

The sprint queen recorded 10.74 seconds in the French capital and is of the opinion that she is peaking when it matters most.

“Running 10.74 was mind-blowing for me and I’m looking forward to racing in Stockholm,” she confessed.
“I’ve been training hard since the Paris race. I’ve been lifting weights and running over 200m which I don’t like!

“This year I am focussing in the 100m. Training has been very good and I feel a lot stronger and I’m looking forward to seeing what the work has done for me.

“Every race counts leading up to the World Championships.

“The female sprinters are not far apart in terms of times, so it is just about getting it done.

“I had a very good field against me in Paris. There was English Gardner, Blessing Okagbare and Murielle Ahoure amongst others.

“All of them could be in the final in Beijing, so it was more about execution as opposed to the time. But I was really excited when the time came up.”

However, despite the form of her contenders, humble Fraser-Pryce remains the woman to beat and she is content with that fact.

“Of course they want to beat me all the time but that is natural as I am Olympic and world champion,” she admitted.

“I too am hungry and aggressive. I smile a lot when I am at the start line but I am aggressive too. I’m ready to go and want to win.

“My competitors see me as a threat and the one to beat but my focus is getting out of the blocks and ahead of everybody else and running my race.”

The Jamaican has not targeted that time, rather she is just looking to execute efficiently.

“I don’t tend to focus on meet records and times. If I go out and execute close to anything like I did in Paris, then I’ll run a fast time and that’s a given.

“I’ll just look to get out of the blocks ahead of everybody else and stay composed. “Based on what I’ve been doing in training, and how I feel, I’ll get a good time.”