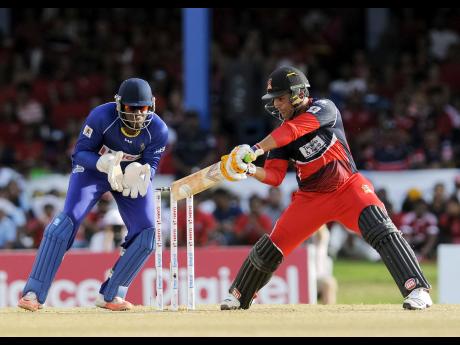 CPL photo
CPL photo Kamran Akmal of Trinidad & Tobago Red Steel on the go during his topscore 60 in the Caribbean Premier League final last Sunday at Queen's Park Oval in Trinidad. The wicketkeeper is Steven Taylor of Barbados Tridents.

Trinidad and Tobago Red Steel coach Simon Helmot has praised the fighting spirit of his players after they rebounded from the bottom of the table to win the third edition of the Caribbean Premier League.

Red Steel defeated the 2014 champions Barbados Tridents by 20 runs in the final at the Queen's Park oval on Sunday.

"I am really proud of this team," said Helmot.

"I thought we put up a great fight throughout the season and then to play 10 games in 16 days and to come out victorious is an enormous effort."

Red Steel, losing semi-finalist in 2013 and 2014, arrived for their home matches in Trinidad at the bottom of the standings.

"We were only bottom because we played fewer games than everyone else," he said.

"But it is a daunting prospect knowing that other teams have got points in front of you. That can be difficult to handle

Dwayne Bravo's men also endured a tough route to the final by beating Chris Gayle's Tallawahs a second time and also getting past Guyana Amazon Warriors in the second semi-final eliminator.

"It was a unique experience," said the Red Steel coach.

"The fact that we played ten matches in 16 days and out of those we were able to win seven, it was an extraordinary effort, and I certainly have not been involved with a team that has done that before."

Red Steel successfully defended their 178 for five, playing before a sold-out crowd at Queen's Park Oval on Sunday.

They stifled the Tridents' dangerous batting line-up, to take their first ever CPL title.

"In the final, I thought we batted exceptionally well," Helmot pointed out.

"We knew when we have strong partnerships at the top, we have success, and that has happened throughout the tournament and that really gave us a launching pad to accelerate at the back end of the innings."