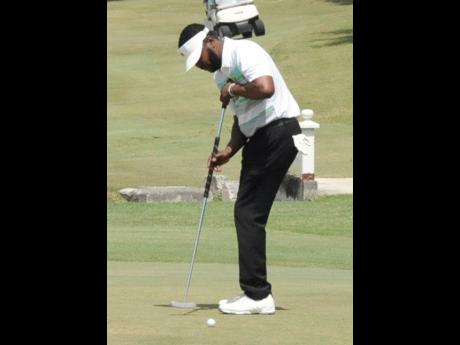 Jamaica’s Owen Samuda uses a long putter at the 18th hole on Day Two of the Caribbean Golf Championship at the Cinnamon Hill Golf Course in Montego Bay yesterday. Samuda stroked a 72 to help Team Jamaica to the top of the team standings.

Jonathan Newham had to overcome strong winds on Day Two of the Caribbean Golf Championship, Hoerman Cup, to fire a safe 71 at the Cinnamon Hill Golf Course, Montego Bay yesterday to pull team Jamaica into the lead.

Newham and teammate for the round, Owen Samuda (72), managed the course expertly as the Jamaicans took over the lead from Puerto Rico, who held a 154-pt lead from the opening round.

Jamaica claimed the lead with 602, 26 over par as a team, and are followed by the Dominican Republic 32 over. Puerto Rico are next 36 over par. Barbados had a 42 over par, Trinidad and Tobago 46, Cayman Islands 48, Bahamas 63, and the US Virgin Islands 110 over par, round out the team standings in the Hoerman Cup.

Newham bettered his opening round 73, and is at Even for the championship, while Samuda who had a bad opening round with 78, managed the windy conditions expertly to fire a second round 72, but is in sixth place on six over par through two rounds.

"This Jamaica team is a pretty strong one and if it remains windy for the rest of the championship, I think Jamaica will be in a better position to win outright," Samuda added.

The Cayman Islands' Brian Ross is second on the leader board, having stroked 73 on the day, one higher than his 72 on Monday's first round.

Meanwhile, there is a tie for third with James Johnson of Barbados and Devaughn Robinson (Bahamas) on four over. Puerto Rico's Jeronimo Esteve is fifth on five over par through two rounds of golf.

The other Jamaican, Ian Facey struggled to a plus 10 (14th). William Knibbs is tied for twentieth on 14 over par with Barbadian Mark Stollmeyer and Sean Morris is in 16th place and in a tie with Roger Bostic of Barbados.

Puerto Rico continue to lead in the George Teale Trophy for women with a 155 second round score.

The US Virgin Islands are next after firing a combined 151, 23 over par, while Trinidad and Tobago come next on 163 for the round. Jamaica is tied for fifth on 43 over par for a combined score of 170.

Trinidad and Tobago lead the Francis/Steele-Perkins Cup with 3 under par. The Jamaican team of Keith Stein and Radcliff Knibbs struggled to end round two on 74, three of the 71 they hit on Monday.

The championships continue today with tee of set for 8:00 a.m.