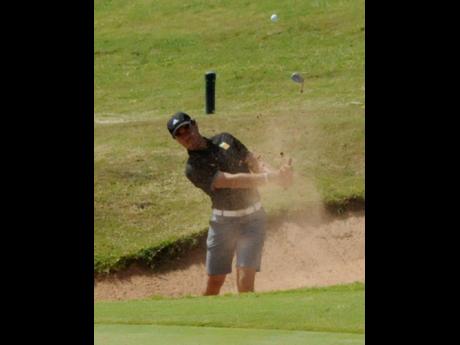 Jonathan Newham carded a 71 to keep Jamaica in the hunt for top honours at the Caribbean Amateur Golf Championship in Montego Bay. Here, he makes a shot out of the bunkers at the at the Half Moon Golf Course.

Jamaica's Jonathan Newham equalled his second-round 71 to lead the individual race in the Caribbean Golf Championship Hoerman Cup at the Half Moon Golf Course in Montego Bay yesterday.

Newham's score puts him one under par for the day and an equal minus one through three rounds, giving host Jamaica a share of the lead with the Dominican Republic, who rallied on the third day through the pair of Redhames Pena and Lino Guerrero.

The stakes remain high with only today's final round remaining to separate the teams.

Newham started well from tee-off, and although he had a few setbacks on the front nine, he used the quick fairway and solid greens to maintain his lead.

Devaughn Robinson of The Bahamas carded the best score of the round, a minus two under par 70 score. It was the best round of any player in all three days, bettering his opening round 76 on Monday and the 75 he fired on Tuesday.

It took him up the leader board where he joined Newham, with Pena in third overall after his 71. He is at six over par through three rounds.

Newham again used the conditions to his advantage as the wind, though not as heavy as Tuesday's, made play tricky for some players.

The other Jamaicans, Owen Samuda, had a tough day out on the links, firing an 81 to be tied for thirteenth on 15 over par, while Ian Facey (78) and Sean Morris (73) lost ground to the leaders.

Jamaica remain fifth in the George Teale Trophy for women on a 52 over par score, trailing leaders Puerto Rico (32 over par) by some distance.

Madelyn Piccininni is the best-placed Jamaican among the women. She did admirably better than her 81 and 85 in the two previous rounds after carding a 78 on Wednesday.

The field is being led by Dominican Republic's Karina Sanchez, who was the best on the day on the women's side.

Trinidadian pair of Carlos Baynes and Richard Camacho had a combined 70 to increase their lead in the Higgs and Higgs trophy to five under par, with Robert Piggot and Michael Haynes of Barbados at minus 2 and in second place.

The Jamaican pair of Keith Stein and Radcliff Knibbs are holding on to third, after firing a combined 71 to be at Even Par, through three rounds at the Half Moon Golf Club.