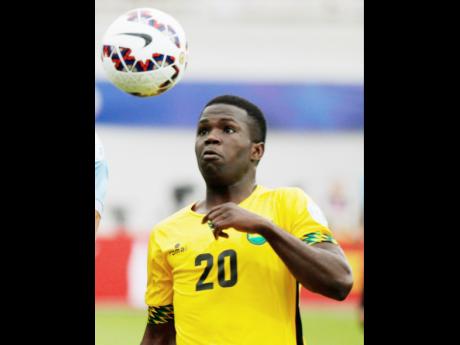 Jamaican fullback Kemar Lawrence believes hard work, humility, and his faith in God are responsible for his significant improvement over the past few months since he joined the New York Red Bulls in the USA's Major League Soccer in March this year.

The 22-year-old Lawrence, known affectionately as 'Taxi', who was also a standout while he played for Red Stripe Premier club Harbour View FC, was this week named to a CONCACAF Gold Cup XI for his outstanding play, which helped the national team become the first from the Caribbean to advance to the final of the competition.

He was one of four Jamaicans named to the squad. It was only last month that Lawrence was named to a Copa AmÈrica XI following the team's performance in the competition, losing 0-1 each to world number one Argentina and Uruguay and Paraguay.

So what's been the secret behind Taxi's success?

"It's just me doing the things that I know how to do, being simple, listening to instructions, listening to my teammates, being more relaxed, being more composed on the ball, and taking the time out, even though I don't have a lot of time, to do some extra work and taking the time out to pray and ask God to guide me through this new adventure," he said.

His quality at left back has also helped Jamaica play some of its best football in recent times. He demonstrated exemplary defensive maturity and leadership when Jamaica won the CFU Caribbean Cup in 2014, and he continues to shine during national representation. He feels however, that it is more than his doing why Jamaica is improving on the field of play.

He gives much of the credit to Head Coach Winnfried Sch‰fer.

"Coach Sch‰fer gives us a lot of respect and he gives us the opportunities to go out there and do what we know how to do. He lets us be relaxed and be the team that we want to be. He doesn't force anything on us," Lawrence said.

He also revealed that Sch‰fer does not impose his ideas on the players, opting instead to hear what their ideas are as it relates to how they play.

"He doesn't force anything on us," Lawrence said. "If he has an idea, he brings it across to the captain or a couple other players and then he brings it across to the group, and I think that's the difference with him. Instead of going out and doing what he feels like, he tries to get everybody together to find out if everyone understands and if everyone wants to go in that direction. He tries to get the group involved, and that is why he has been so exceptional."