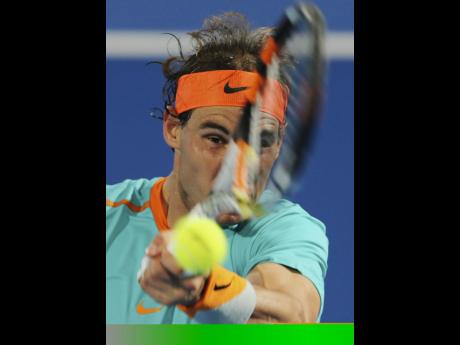 England fast bowler James Anderson will miss the rest of the third Ashes Test and all of the fourth at Trent Bridge with a left-side strain.

The England and Wales Cricket Board (ECB) made the announcement yesterday, a day after England's all-time leading Test wicket-taker walked off the pitch hurt in mid-over at Edgbaston in the last session of the second day.

The ECB statement adds "his availability for the final Test in the series will be determined in due course." The fifth Test starts on August, 20 at The Oval.

Anderson took 6-47 in Australia's first innings at Edgbaston, and has 413 Test wickets overall.

Nadal's semi-final opponent will be Andreas Seppi, who reached the last four without having to play. His opponent, Simone Bolleli, withdrew with a stomach ailment.

Nadal is looking to extend his streak of having won at least one European clay-court title every year since 2004. The former top-ranked player has dropped to No. 10 in the world.

Pouille reached his second semi-final of the year by ending Paire's seven-match winning run that included his maiden title in Bastad, Sweden.

To take their seeded place in the Baku Cup final, Anastasia Pavlyuchenkova of Russia and Karin Knapp of Italy will have to beat two first-time semi-finalists on the WTA tour.

No. 1-seeded Pavlyuchenkova defeated Kirsten Flipkens of Belgium 6-1, 6-3 in the quarter-finals yesterday, saving all four break chances she faced, while No. 2-seeded Knapp beat Alexandra Panova of Russia 6-2, 7-6 (4) to even their head-to-head at 2-2.

Pavlyuchenkova will meet Patricia Maria Tig of Romania, who stymied the only break chance Donna Vekic had, and beat the Croatian 6-3, 6-2.

Knapp faces Margarita Gasparyan, who won an all-Russian quarter-final with Evgeniya Rodina 6-3, 6-2. Gasparyan is one of Russia's biggest hopes, and has come on this year with four ITF circuit titles in France, Russia, and Slovakia, and qualified for her first French Open and Wimbledon.