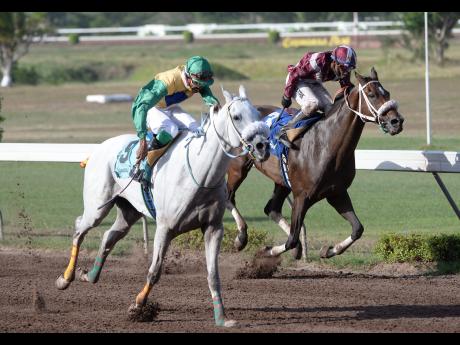 Jermaine Barnaby
Jockey Sadiki Blake (left) pushes OUR CREATION to a one and three quarter length victory ahead of COLD GROUND (Aaron Chatrie) in a $350,000-$300,000 claiming event at Caymanas Park on Saturday July 18.

The annual Betting, Gaming and Lotteries Commission (BGLC) raceday is on at Caymanas Park, a 12-race programme featuring the BGLC Trophy, open allowance race, 1100 metres, to be contested by 11 starters.

Offering a total purse of $1 million, it promises to be a hotly contested sprint, featuring fleet-footed horses such as TALENTED TONY K, FORTUNONEHUNDRED, TOOTING CAT, RIO COBRE and TRADITIONAL PRINCE.

Despite the strong support that day, 'TONY K' was hampered by a poor draw on the far side and was asked to carry topweight 57.0k as well.

Now eased 3.kg in the scales and trainer Lorne Kirlew securing the services of former champion jockey Wesley 'Callaloo' Henry, TALENTED TONY K should prove the fastest of all.

The four-year-old colt, who won the 2000 Guineas and Lotto Classic in 2014, reports in good nick. Kirlew has confirmed that all is right with the bay colt by Traditional out of Ocean Liner. He should display superior speed into the straight with FORTUNEONEHUNDRED, TOOTING KAT and RIO COBRE giving chase.

TRADITIONAL PRINCE AND FORTUNEONEHURDRED both carry topweight of 57.0kg, effectively making it tough for both.

TALENTED TONY K should have most to fear from RIO COBRE, by virtue of his short head second to TRADITIONAL PRINCE on July 4. He carries a mere 49.0kg and, at these weights, looks the principal danger to TALENTED TONY K.

RUNNER RUUNER is fancied in the second race, UNBREAKABLE to repeat in the third, MEET JUSTIN in the sixth, TECHNOCAT in the eighth and RUM PUNCH in the Emancipation Day Trophy over 1300 metres (race seven).