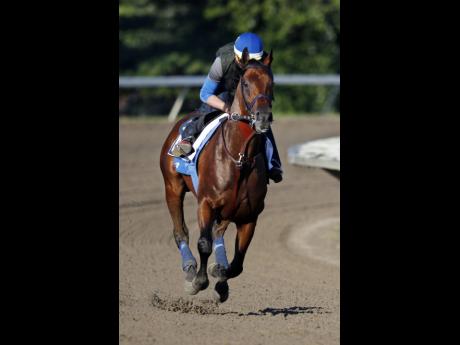 From a beauty salon in Beverly Hills to an intersection in Zurich, people are talking about American Pharoah.

Derek Jeter. Carrie Underwood. Drew Brees. Even Cheech and Chong. All have chatted up either the owner, trainer or jockey of American Pharoah in the weeks after the horse became the first Triple Crown winner in 37 years with a sweep of the Kentucky Derby, Preakness and Belmont Stakes.

"He's captured the imagination of the nation," says Ahmed Zayat, the effusive Egyptian owner who travels the world on business and resides in Teaneck, New Jersey. "More than just a nation, if I dare say."

Today, American Pharoah returns to the races in the $1.75 million Haskell Invitational at Monmouth Park, the Jersey Shore track a few furlongs from the home of rocker Bruce Springsteen, whose classic Born to Run has become the Haskell pre-race anthem.

On this day, though, Pharoah will be The Boss.

"We have a legend here with American Pharoah," says Dennis Drazen, a management consultant to the track. "People are going to be talking about being there the day American Pharoah ran at Monmouth Park in the Haskell."

Thrilled to have American Pharoah, track officials this week boosted the total purse of the race by $750,000 to a record $1.75 million. The winner's share is $1.1 million. A record crowd approaching 60,000 is expected. A three-day "Pharoah Phan Phestival" began on Friday, with giveaways, contests and a chance for fans to watch American Pharoah on his morning gallops. About 5,000 showed up Friday.

The Triple Crown winner is the overwhelming 1-5 favourite in an eight-horse field going 11/8 miles.

"He has so many fans," says trainer Bob Baffert, who said his wife, Jill, told him that a little TV was tuned in to the Belmont at the beauty salon she goes to in Beverly Hills, California. "There's people in front of his barn in the mornings and people watching him gallop and cheering for him every time. It's fun to really share him with the fans."

From the moment American Pharoah won the Belmont, Zayat hasn't wavered in his desire to keep racing his prized horse - even though he's sold the breeding rights for what could be as much as $30 million, with a stud fee that could be in the $100,000 range.