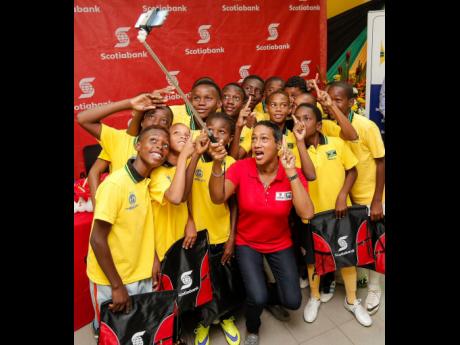 Contributed
Heather Goldson (centre), regional marketing director at Scotiabank, uses a selfie stick to take a photo with members of the national Under-13 team, who will be participating in the CONCACAF Under-13 Champions League, during a press conference at the Jamaica Football Federation (JFF) academy at UWI Bowl, Mona, on Friday.

Though not national football champions in almost three seasons, Harbour View FC's pedigree and history continues to impress, with the Jamaica Football Federation (JFF) nominating the east Kingston club to represent Jamaica at the inaugural Scotiabank CONCACAF Under-13 Champions League.

The youth showpiece will be held at the Cruz Azul Acoxpa Stadium in Mexico from August 4-8.

The revelation was made on Friday at the JFF Academy at the University of the West Indies (UWI), Mona.

"I commend Scotiabank for this initiative to help develop our football in Jamaica," said JFF director of football, Vin Blaine.

"It will also enhance our programme at the national level, as travelling to Mexico is special, as they are the top CONCACF team," he outlined.

"We have toiled over many years to have significant interest in young players.

"We look forward to the success of these young players as the years go by," he added, describing current Reggae Boy, Kemar 'Taxi' Lawrence as the club's latest role model.

As title sponsors of the Gold Cup, the Champions League and the Caribbean Nations Cup, Scotiabank has turned its attention to youth development.

"One of Scotiabank's core mandates is to support the development of youth through sport," said Heather Goldson, regional marketing director at Scotiabank.

"The Scotiabank CONCACAF Kids' Champions League allows us to remain true to our drive to encourage youth development," she added.

The squad includes 17 members from Harbour View, Kingston and St Andrew Football Association (KSAFA)-based clubs and clubs outside Kingston. It is coached by Noel McLaren and assistant Sydney McLaren, while the team's captain is Rojaughn Joseph.

Meanwhile, KSAFA president Stewart Stevenson said: "I know Harbour View; they always give of their best, and I expect excellent performances."