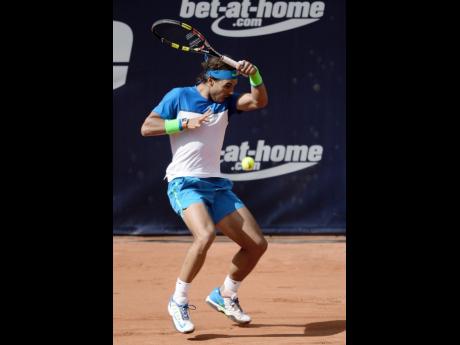 Nadal is looking to extend his streak of having won at least one European clay court title every year since 2004. The former No. 1 has dropped to 10th in the rankings and is playing his first tournament since losing in the second round of Wimbledon. He won in Hamburg in 2008, the last time he played in the clay-court event. Nadal served a double-fault at match point in the seventh game before breaking serve in the next to win. He holds a 4-2 career edge over Fognini, the 2013 Hamburg champion.

Nearly a year later, British swimmer Adam Peaty's world record in the 50-metre breaststroke isn't ratified. Records usually take weeks to be made official, but Peaty's mark of 26.62 seconds at the European Championships in Berlin last August hasn't been approved by FINA because he was not tested at the time for the blood-booster EPO.

It was a simple administrative error because a box was not checked on the drug-testing form, FINA honorary secretary Paolo Barelli, who is in charge of the issue, told The Associated Press.

"The form for world records includes a test for EPO," Barelli said. "The lab analysis performed in Germany didn't do it because there wasn't an 'X' on the tiny box for EPO."

Barelli suggested that British Swimming should appeal to the Court of Arbitration for Sport.

"They have every reason to," Barelli said. "It's not the British federation's or the kid's fault. It was an administrative error."

"Sports should not be mixed with politics," said Akram, who took 414 Test wickets with his hostile left-arm swing and also scored three test centuries.

Pakistan plan to host a three-Test series against its Asian neighbours and rivals in the United Arab Emirates in December. If it takes place, that will be the two countries' first Test matches against each other since 2007, when India won a three-match series 1-0.

Anurag Thakur, secretary of the Board of Control for Cricket in India (BCCI), has cast doubt on the series.

Akram said the Pakistan team was treated well on a tour of India in 1999 despite restrictions.

"We stayed in hotels and we were not allowed to go outside," Akram said in Karachi. "At that time there was politics too, but it should not be mixed with sport."

Patricia Maria Tig of Romania and Margarita Gasparyan of Russia both reached their first career WTA final yesterday after upsetting the two top-seeded players at the Baku Cup. Tig ousted No. 1-seeded Anastasia Pavlyuchenkova of Russia 6-3, 6-2 to extend her surprising run at the tournament, while Gasparyan beat No. 2 Karin Knapp of Italy 6-3, 5-7, 6-3.

The 154th-ranked Tig had never been past the second round of a WTA tournament before this week. Gasparyan had not won a WTA match this year before coming to Baku, but had not dropped a set here before the semi-finals.