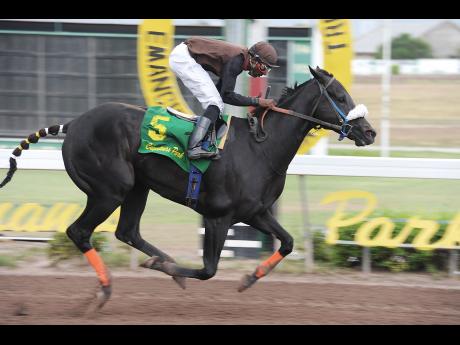 TRADITIONAL PRINCE, running at odds of 10-1 with Aaron Chatrie aboard, overcame a slow start to win the 11th running of the Betting, Gaming and Lotteries Commission Trophy open allowance race in a bang-up finish over 1200 metres at Caymanas Park yesterday.

The betting made FORTUNE-ONEHUNDRED a 9-5 marginal favourite ahead of the speedy TALENTED TONY K at 2-1, but despite his consistency the Patrick Lynch-trained TRADITIONAL PRINCE was overlooked in the market.

TRADITIONAL PRINCE hurt his chance by rearing at the start and was the back marker in the early stages as TALENTED TONY K with Wesley 'Callaloo' Henry aboard disputed the lead with the rank outsider, TOOTING KAT (99-1), in a field of 11.

TALENTED TONY K soon surged ahead at the half mile, but FORTUNEINEHUNDRED was sent in serious chase by Robert Halledeen as both turned for home almost heads on. Although FORTUNEONEHUNDRED grabbed the lead a furlong out, the run-on horses by then were getting into top gear, with topweight TRADITIONAL PRINCE producing a storming rail run in the last 100 metres to catch FORTUNEONEHUNDRED, winning by a neck, with another neck to the fast-finishing SCOOP JORDYNE (13-1) in third and EDISON (8-1) finishing a mere length away fourth.

A seven-year-old bay gelding by Traditional out of Princess Lal, TRADITIONAL PRINCE is owned and bred by Dr. Granville Ashton.

Chatrie said he had ridden TRADITIONAL PRINCE in the past and knew what he was capable of.

"I expected a fast pace with 'TONY K' in the line-up, so although losing lengths at the start, I knew the pace would to come back in the closing stages, and it did. I saved ground on the inside from the half mile, got a rocky run on the inside rails and was able to catch them in the nick of time," said Chatrie, who had a second winner on the card in 5-1 chance ABOVE THE RADAR in the third race over 1820 metres for the Josseth Grey Memorial Cup.

Chatrie, along with Wesley Henry, each rode two winners on the card, but all were upstaged by title-chasing jockey Halledeen, with three winners. These were the two-year-old debutante DREAMLINER at 3-5 for champion trainer Wayne DaCosta in the first race, PREMATUREE at 5-1 in the eighth and DWAYNE STAR for trainer Lynch in the eighth race over the straight to move to 46 wins so far this season.