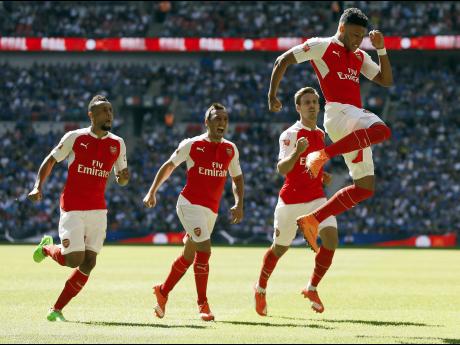 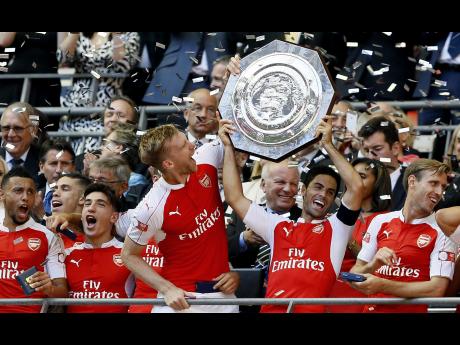 Oxlade-Chamberlain received the ball on the right edge of the area in the 24th minute and cut inside César Azpilicueta before hitting a left-footed shot inside the top far corner to decide the traditional curtain-raiser between last season's Premier League and FA Cup winners at Wembley Stadium.

Wenger had not beaten Mourinho in 13 previous meetings - a rivalry stoked by plenty of verbal barbs between the two and which shows no sign of dying down. Wenger didn't shake hands with the Chelsea manager after the game, and Mourinho said Arsenal had left "their philosophy in the dressing room" by playing defensively in the second half.

"The best team lost. And the defensive team won," said Mourinho - who is usually the one being accused by others of deploying overly defensive tactics.

Wenger acknowledged that his players may have been affected by their recent struggles against Chelsea but that his own winless streak against Mourinho "didn't play on my mind at all.

"But as long as I get it served every time in press conferences it can have an impact on the team," he said. "It was important for them to get that hurdle out of the way."

And the Arsenal manager may be tempted to see this win as another sign that his team is finally ready to challenge for the Premier League title again when the season starts next week.

However, Arsenal beat Manchester City 3-0 in last year's Community Shield only to falter early in the league before finishing third - and defender Per Mertesacker was careful not to read too much into the victory.

"It's still preseason," Mertesacker said. "But it keeps our confidence high. I think we deserved it."

Mourinho responded to the defeat by throwing his losers' medal into the crowd before leaving the pitch.

Eden Hazard had Chelsea's best chance for an equaliser when Cesc Fàbregas found him in the area around the hour mark, but he blasted his shot well high under pressure from Laurent Koscielny.

Goalkeeper Petr Cech, making his full debut for Arsenal against his former team after transferring from Chelsea during the off season, then made his only difficult save in the 68th when he punched away Oscar's free kick at the near post.

Radamel Falcao made his Chelsea debut when he came on as a substitute for Loïc Rémy in the second half but was kept largely quiet.

Both teams fielded near full-strength teams. The only changes from Arsenal's side that won the FA Cup final last season was Cech in goal and Oxlade-Chamberlain starting instead of Alexis Sanchez, who was given an extended break after winning the Copa America with Chile.

Diego Costa was the only notable absence for Chelsea as he was rested with a hamstring problem.

Santi Cazorla could have added a second for Arsenal in the 86th but hit a weak shot straight at the onrushing Thibaut Courtois and Aaron Ramsey lobbed the rebound just wide. Courtois then denied Kieran Gibbs when he was clear on goal in injury time.

"I believe that when we got out of our defence we looked dangerous to score," Wenger said "But I think maybe, in our half, we were a bit cautious."