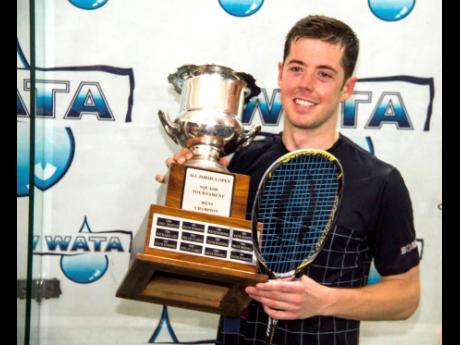 Contributed
Jamaican number one, Chris Binnie, poses with his trophy after winning the men's title for the sixth time at the All Jamaica Squash Championship last weekend.  Binnie beat the number two seed, Lewis Walters 15-13, 11-4, 11-9 to win the title. 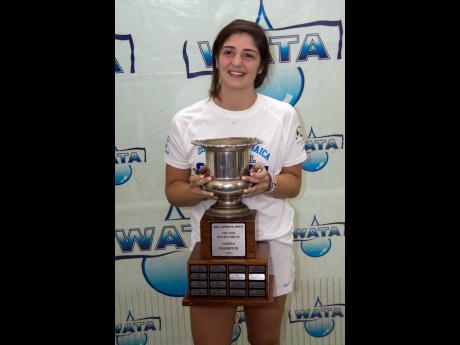 Defending champion Chris Binnie claimed his sixth men's title and Mary Mahfood won her first senior women's trophy as the WATA All-Jamaica Squash Championships wrapped up over the weekend at the Liguanea Club in New Kingston.

Facing his strongest competition in recent years, Binnie pulled out all the stops to beat his fellow professional player, Lewis Walters, who was out to end Binnie's dominance on local soil.

The training partners played a brutal first game, with Binnie barely managing to prevail. However, with one game under his belt, the reigning national and Caribbean champion grew in confidence, convincingly winning the second game and then staving off a third game rally to beat Walters 15-13, 11-4, 11-9.

"It was one of the toughest finals I've had at the All Jamaica because Lewis is such a strong player, so I'm very happy that I came out on top because no matter where in the world I play it means a lot to me to defend my national title," Binnie said.

In the women's competition, Mahfood delivered a commanding performance to beat Alyssa Mullings 11-9, 11-4, 11-8 and dethroned the two-time champion. The win gave Mahfood, the

current All-Jamaica Under-19 champion, her first senior title and an edge over Mullings, her teammate and arch-rival.

"It's never easy to play Alyssa because she's such a fighter, but I've been working on my game playing on the US college circuit, and I've sharpened my match skills, so I'm very happy with my performance at this tournament," Mahfood said.

Mahfood was also voted Most Outstanding Female Player while senior national team player, Bruce Burrows was the most outstanding male. The gutsy journeyman prevailed 14-12, 6-11, 11-6, 8-11, 14-12 to beat Julian Morrison for third place, making him the top amateur player in the men's draw.

Jamaica Squash Association President Chris Hind said, "We could not have been more pleased with how the tournament unfolded. As professionals, Chris (Binnie) and Lewis (Walters) are lifting the level of local squash and we were thrilled to see Mary (Mahfood), a junior champion, breaking through to the next level and winning a senior title."

"WATA is very pleased to contribute to the growth of local squash," said Andrew Mahfood, CEO of the Wisynco Group. "We anticipated that this would be an exciting competition and we're thrilled that the players delivered consistently throughout the tournament."