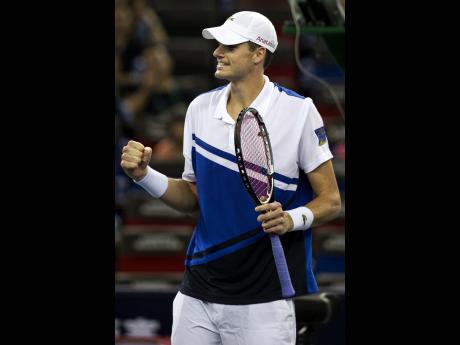 The top-seeded former University of Georgia star has reached the finals in Atlanta in five of the past six years and is 20-3 in the event. He has 10 ATP Tour titles.

Baghdatis, who appeared to suffer a right-leg injury late in the first set of his 12th ATP final and first since 2011, scored just two points against 18 Isner serves in the second set.

Gasparyan served for the match when up 5-4 in the second set but was broken back at love. However, she dominated the final set to wrap up the win in 21/2 hours.

Gasparyan had never won a main-draw match at the WTA level before this tournament, while Tig - a qualifier - was also playing in her first tour final.

The 112th-ranked Gasparyan said "it's been an amazing tournament for me."

With an Olympic flag draped around his neck, the official from South Sudan couldn't contain his emotion.

Moments after his war-torn country was officially recognised by the International Olympic Committee (IOC) yesterday, Tong Chor Malke Deran wiped tears from his eyes and later broke down when talking about the plight of his nation's athletes.

The decision means the world's newest nation will be able to have its competitors enter the stadium in Rio de Janeiro next year behind their own flag. More importantly, the country's near non-existent sporting infrastructure and athletes will receive funding assistance from the IOC.

South Sudan, which split from Sudan and became independent in 2011, has been hit by civil war for the past two years.