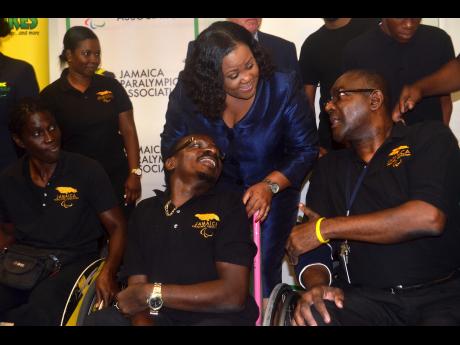 The four-time Para Pan Am medallist says he will be going for glory, records and top honours when the fifth Paralympics Pan American Games get underway from August 7-15 in Toronto, Canada.

"I am aiming to better what I did at the last Pan Am Games, where I got gold and silver, so I am definitely striving for two gold this time around," said the current Pan Am record holder in the men's F52/53 javelin.

He maintains he is calm, under no pressure and just going to do his best.

"I am looking forward to doing good ... just going out there to throw near the record or break the record," Cunningham added.

Cunningham continues to show strong will, determination and resilience.

"Motivation, that's one of the aims for me in the sport, I take up on myself the responsibility, like our president says, performances make people focus on you and respect you ... and sponsors and so on," he reasoned.

The JPA was established in 2008 and replaced the Jamaica Paraplegic Association, which was formed by the late Sir John Golding in 1966. It is a government-approved national body for sports, for persons who are physically challenged and visually impaired.

"I just try to do good, try to get medals as much as I can and make people wanna do the sport," Cunningham told The Gleaner in an interview at the naming of the team at the Jamaica Olympics Association (JOA) on Cunningham Avenue.

The Jamaican is currently number one in his class in South America, is a medallist at the Pan Am, World Champs and Paralympics level, while locally, he is a brand ambassador for local telecommunications firm Digicel.