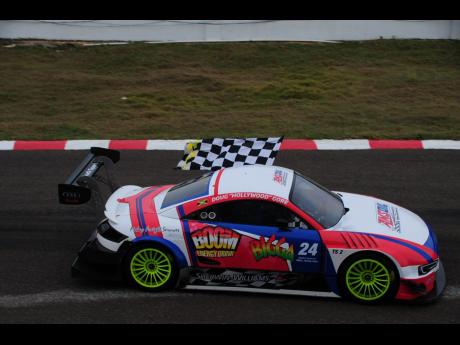 Doug 'Hollywood' Gore was back to his supreme best at Sunday's Emancipation of Speed racemeet at Jamwest Speedway in Negril.

He blew away all challenges in the three Thundersport Two Championship races - with his Audi DTM in tip-top shape - making the respective trips look like a stroll on a windy Sunday afternoon.

Gore was pleased with the performance of his purpose built race car. He also had glowing words for the track, while looking forward to breaking the record.

"The track and this car complements well. When we rebuilt the car after the last crash we knew we would have to come to Jamwest and this car would be very fast, especially with all the aerodynamics built into it," Gore said.

"Cornering with this car is great at high speed. It is built for the speed. The improvements done to the car makes it really better than before," he added.

Gore was in a no-nonsense mood from the onset, posting 1:07.28 in qualifying, a full three seconds faster than nemesis David Summerbell Jr. in his Evolution Eight.

Summerbell was not at his best as he had to contend with low power output from his car, which only made him good enough for three fourth place finishes behind Gore in the Thundersport Two events.

Summerbell told The Gleaner that while he was happy to have gotten some points towards his TS2 championship title chase, he was frustrated, because he could not really challenge his competitors owing to the problems with his car.

No Summerbell, no problem for Gore and he let loose in his first race of the meet, taking the chequered flag in 1:08.73 seconds. Campbell, racing his power-packed BMW M3, grabbed second place in 1:10.25. Heath Ca swell was third in his Subaru Impreza, timed at 1:12.73 seconds and Summerbell a disappointing fourth in 1:12.46.

Gore was equally devastating in the second Thundersport Two race, thrilling the fans to once again take the flag ahead of Campbell in a smart 1:08.64 seconds. Campbell returned a time of 1:10.41, with Peter Rae copping third place in his Mazda RX7.

As expected, Gore ripped to threads the other aspirants in the third Thundersport race, posting 1:08.73 to take the chequered flag. Again, Campbell had to settle for second in 1:10.25, with Causwell in third and Summerbell fourth.

"Jamwest is a great location and if we had the full complement that raced at Dover here it would make it more interesting. This track is world class. I have a fast car and it's just eating up the track. I am happy with the results," Gore said.