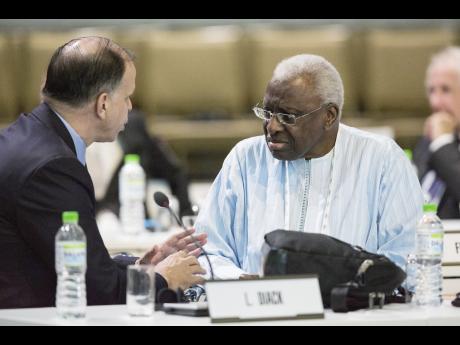 With his federation embattled by widespread doping allegations that could lead to a reshuffle of Olympic and World Championship podiums for more than a decade, International Association of Athletic Federations (IAAF) president Lamine Diack defended his organisation's anti-doping record and dismissed the accusations as a "joke" yesterday.

Diack, who will be stepping down later this month after 15 years at the helm of the International Association of Athletics Federations (IAAF), also questioned the timing of the reports, which came out three weeks before the track and field World Championships in Beijing, which run from August 22-30.

"They are playing with the idea of a redistribution of medals," Diack said at the International Olympic Committee (IOC) meeting in Kuala Lumpur. "It's possible, if we prove with the new techniques at our disposal that someone doped. Otherwise, it's a joke. Just three weeks before the World Championships, there is something behind."

Diack spoke after German broadcasting outlet ARD and the Sunday Times newspaper in Britain said they obtained access to the results of 12,000 blood tests involving 5,000 athletes. The leaked files came from the database of the IAAF.

The report found that 146 medals - including 55 golds - in disciplines ranging from the 800 metres to the marathon at the Olympics and World Championships were won by athletes who have recorded suspicious tests.

The Sunday Times said that 10 medals at the 2012 London Olympics were won by athletes with suspicious results, and that in some finals, every athlete in the medal positions had recorded a dubious blood test.

"There is a film and a newspaper who are asking questions," said Diack. "We are going to answer them all, but it's not (just) because someone has a suspicious profile once that he was doped. When people say that there are medals to be redistributed from 2001 to 2012, it's just a farce."

The IOC has previously stripped medals from athletes who have been retroactively found guilty of doping offenses dating back to the time of the Games. The IOC also stores Olympic doping samples for 10 years for possible retesting.

IOC president Thomas Bach said it is up to the World Anti-Doping Agency (WADA) to investigate the allegations, including that one-third of medals in endurance races at the Olympics and World Championships from 2001 to 2012 were won by athletes who recorded suspicious blood tests.

"If there should be cases involving results at Olympic Games, the IOC will react with zero tolerance with our usual policy," Bach said. "But at this time, we have nothing more than allegations. We have to respect the presumption of innocence of the athletes."

Diack, who also suggested that the allegations were timed to overshadow the IAAF presidential election on August 19 that will pit Sebastian Coe against Sergei Bubka, did not specify which countries could be interested in a redistribution of medals.

"I'm not sure what he meant. Whether he's worried about it's too long, too late to do some of those, or who knows," said Pound, who is heading a WADA commission investigating earlier allegations of widespread doping and cover-ups in Russia, particularly in track and field.

Anti-doping scientist Robin Parisotto, who reviewed the data obtained by the media outlets from the period covering 2001 to 2012 with blood doping expert Michael Ashenden, has been critical of the IAAF, saying many athletes appeared to have doped with impunity.

Diack denied any wrongdoing by his federation, claiming that the IAAF "has done everything for doping control" over that specific period.

"No one has been destabilised; we are stronger than that," he said. "Everything that has been done in the fight against doping has been made by IAAF."

The reports also alleged that more than 80 of Russia's medals were won by athletes with suspicious tests, while Kenya had 18 medals won by suspicious athletes. ARD said it has evidence of human growth hormones being used by Russian runners.

The Russian athletics federation said it was "disturbed by the seriousness of the allegations".