22 In Beijing For Richards? 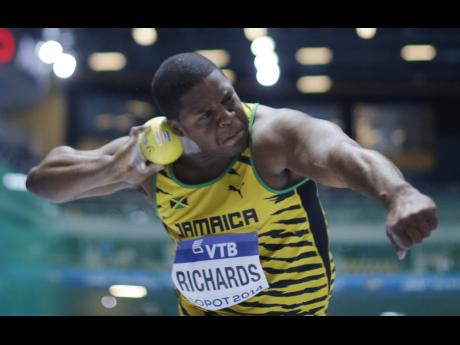 O'Dayne Richards is already the finest shot-putter in Jamaica's history. Richards, however, isn't resting on his hard-won laurels. He has his eye on Beijing, the upcoming World Championships and the 22-metre line.

The stocky MVP putter produced a second-round national record throw of 21.69 metres to win Jamaica's first gold medal at the recent Pan American Games. That mirrored his win last year at the Commonwealth Games, where he took charge of the national record with a distance of 21.62. Even though no Jamaican had ever won shot put gold in either the Pan-Am or Commonwealth Games before, Richards has his aim on Beijing. "The goal is to throw 22 in the final in the World Championships in Beijing," he asserted calmly.

Those firsts don't occupy his mind too much. "It does feel good but I'm not too concerned about the history," he explained. "I believe that other people will come up and do great," he predicted.

He eased off the gas at the Pan-Am Games after the big throw. "I'd thrown 21," he stated. "So the rest of the throws were safe throws to try and keep healthy," he said.

The St George's College and University of Technology graduate is looking forward to meeting world leader Joe Kovacs of the USA and reigning champion David Storl of Germany and the rest of the world's best in Beijing. "I expect them to come and do well, and I'd like to be one of those persons who compete well against them and possibly beat them," he hoped.

The 25-year-old had appeared to struggle early in the season but he and coach Linval Swaby were working on building strength. "After we achieved what we set out in the strength area," explained Swaby, "we started focusing back on throwing and he has been responding."

Kovacs, 22.56, and Storl, 22.20, are the only men with marks past 22 metres, but Richards is number three this season with his national record. Even so, he expects the American pair of former World Champions Christian Cantwell and Reese Hoffa to return to 22-metre territory in Beijing. "I'd just like to join that elite group of throwers who have gone over 22," he said quietly.

"That's my goal," he concluded, "and I believe it is possible to throw far enough to medal."