Pengelley wins trip of a lifetime 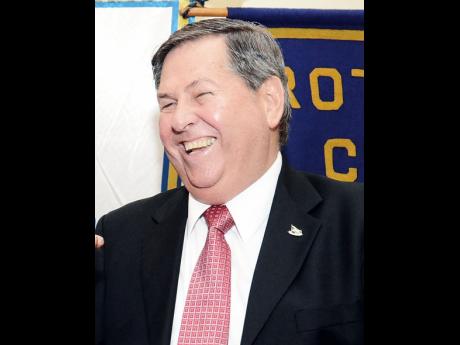 The recently held Johnnie Walker Charity Golf Tournament at the Tryall Golf Club in Hanover raised an estimated J$3 million that will go towards the Diageo Learning for Life Programme, making this year's tournament a success.

However, Brian Pengelley, the Jamaica country manager for AMECO, a business that manages motor vehicle fleets for large companies, might consider himself the real winner coming out of the tournament.

Pengelley, who was formerly employed by Red Stripe, won for himself an all-expenses-paid trip for two to the Formula One Grand Prix race in Austin, Texas, from October 23-25.

Pengelley, who took up his position at AMECO last year, was one of several persons who bought extra bottles of Johnnie Walker's Reserve brands during the tournament, which allowed him an entry into the raffle, along with the golfers who participated in the tournament.

He couldn't believe his luck.

"Total disbelief that I could be so lucky," he said. "I actually thought that Cedric (Blair), when he drew my name from the jar, was joking as I had told him how much I wanted to win this trip on the Friday evening when he announced it."

The excited immediate past president of the Jamaica Manufacturers' Association (JMA) said he was looking forward to the experience of actually being at the race which, he said, is so much better than watching on television.

"I am grateful for the opportunity to attend, but I am extremely hopeful that the package will include pit passes as this is really where you can get close to the cars and the drivers, which is an opportunity of a lifetime."

The trip is proving to be a dream come true for the man who considers himself a huge fan of motorsports.

"I am a huge fan of Formula One as I have been following it for as long as I can remember," Pengelley said. "I also follow motorsport in general, as I used to rally here in Jamaica, and my son raced go-karts (which is where these drivers started) at a very competitive level in Canada. In fact, he and I attended some 10 years ago the F1 race in Montreal, and we have always wanted to experience this again."

Pengelley took time to praise the Learning for Life Programme that has so far provided more than 11,000 Jamaicans with skills that will enable them to provide for themselves and their families.

His praise had more to do with the impact the programme has been having on the lives of some of the country's less fortunate youth and not because he gets to attend a NASCAR racing event.

"We cannot underestimate this initiative of Diageo and Red Stripe here in Jamaica as it sets a huge example of how critical it is that a business like this gives back to our communities, and especially our young people," he said.

"I am personally aware of how extensive and far-reaching the Diageo Learning for Life programme is and how many lives it has touched, and so the opportunity to participate and support is indeed gratifying."