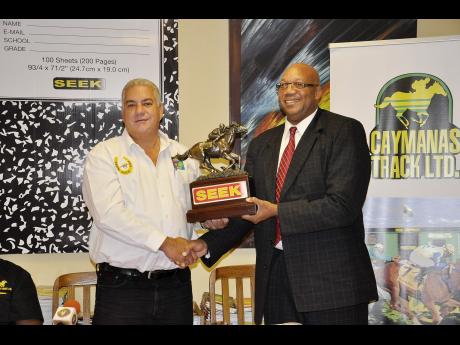 Following a two-year absence due to rebranding, the Seek Exercise Book Trophy race over 1300 metres for open allowance horses will return to Caymanas Park on Saturday, August 15, with a purse of $1 million.

"We are back ... Seek is back at the track, and being a family day, racing fans should welcome us with open arms," said Baylis, who was quick to add that his company will give away 2,000 exercise books at the track in partnership with Office Supplies Brokers Limited (OSBL).

"A lot of people depend on racing for a livelihood and many of them from the various communities within Portmore are valued customers. Second, Caymanas is the home of champions and the Seek brand, which is exclusively Jamaican, is aligned to champions," he explained.

Baylis added that Seek exercise books will be sold at the track on the day, with OSBL offering specials on the popular composition book, with consumers getting a free book for every six purchased.

Richard McCreath, managing director of OSBL, said this was a good deal and he expects a favourable response from racing fans.

Turning to the race, CTL's racing secretary, Denzil Miller Jr, recalled that in the seven previous runnings some outstanding thoroughbreds such as two-time Horse of the Year, SAINT CECELIA, and RONRON have been unsaddled in the winners' enclosure.

"The open allowance level now represents the most exciting and competitive class in racing, and looking back at last Saturday's Betting, Gaming and Lotteries Commission Trophy race over 1200 metres in which TRADITIONAL PRINCE won in a blanket finish involving five horses, we can expect nothing less in the Seek Trophy.

"Many of the horses in that race will be back, including TRADITIONAL PRINCE, the runner-up FORTUNEONEHUNDRED, SCOOP JORYDONE, who finished a close third, EDISON and PHINEAS, who were less than a length away in fourth and fifth places, should make it worth going miles to see," said Miller.

Miller said Book Empire has contributed $250,000 to the $1-million purse and the owner of the winner will gain a lien on the magnificent Seek Trophy, which was handed over by Baylis at the launch.

The Rhoel Rhoden Trophy over 1100 metres for maiden two-years will also be run on the afternoon.

Stewart welcomed back Seek to Caymanas Park, describing the entity as a "prestigious sponsor" whose efforts should ignite the Portmore community.