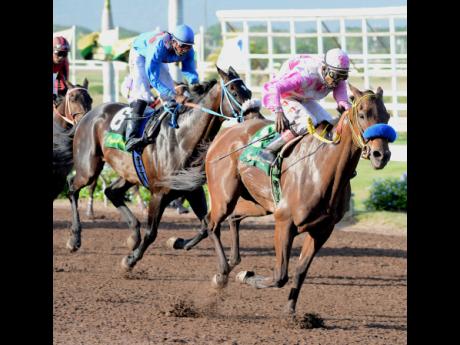 DaCosta saddles ante-post favourite PERFECT NEIGHBOUR, ALL CORRECT and the vastly improved HOVER CRAFT in a field of six.

Despite the small field, the race should be keenly contested, especially with the Fitzroy Glispie-trained TIMEFORARMS, under four-time champion Omar Walker, gunning to crash DaCosta's party.

Last year, PERFECT NEIGHBOUR was woefully unlucky to be beaten by a short head by the Dane Nelson-ridden COMMANDING CHIEF. But the 2013 Derby and St Leger winner represents the class horse of the field, and following his good second to stable companion HOVER CRAFT in the recent The Viceroy Trophy over 1800 metres, he can definitely go one better with topweight of 57.0kg.

True, PERFECT NEIGHBOUR is winless in four starts over varied distances this season. But this marks the first time since winning the Governor General's Stakes over the distance last October (Heroes Day) that the five-year-old son of Natural Selection-Desperatehousewives will be running over the distance, and it's his race to lose, with title-chasing jockey Robert Halledeen aboard.

He has worked well in preparation for this race, galloping seven furlongs in a brisk 1:29.1 on July 31. Remembering his easy win over COMMANDING CHIEF in the Harry Jackson Memorial Cup over 2400 metres last Boxing Day, PERFECT NEIGHBOUR, now back over two turns for the first time since then, catches my fancy.

HOVER CRAFT, who ran on strongly to beat him by two lengths in the June 27 The Viceroy Trophy over 1800 metres when in receipt of 5.0kg, looks the obvious danger on similar weight terms, as the five-year-old son of He'stherealthing-Royal Pizzaz has shown significant improvement in recent months, while ALL CORRECT will more than likely set off in front in this small field and should make a brave bid.

DaCosta's best hope, however, lies with PERFECT NEIGHBOUR, who should bide his time close to the pace before coming through leaving the quarter pole for the victory.

Elsewhere on the nine-race holiday programme, back-to-form DOC HOLIDAY (Halledeen up) should supplement his recent win by capturing the 2015 Independence Day Stakes Trophy over 1600 metres, to be contested by nine starters.

Trained by Marlon Anderson, who has done well with his small string of horses in recent months, DOC HOLIDAY steps down in class with winning form and this should make his job a lot easier, despite the presence of another down-in-class contender, SIRMANDI, who has twice won a mile this season.

I also like COURT CALL in the third race, ROYAL VIBES to catch old rival PRINCE ANDREW in the fifth, and down-in-class HOLOGRAM SHADOW to romp the seventh over 1300 metres.