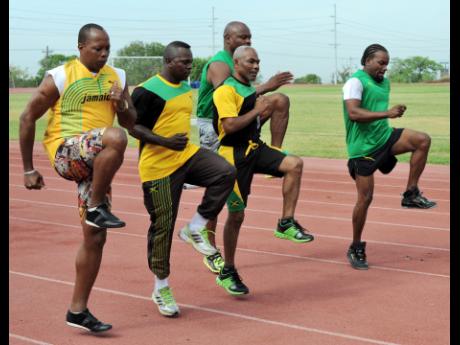 The final three members of Jamaica's World Masters Athletics Championships team left the island last night for the Games, which got under way Tuesday in Lyon France.

Two 400 metres representatives, Robert Grant and Gavin Shand, along with 5,000m stalwart Oral Anderson, are scheduled to arrive in France later tonight, where they will join up with the eight members already there to represent the nation at the biennial event.

Anderson, who is an employee of The Gleaner, noted that the team has undergone great challenges in its effort to get to France, but was pleased to be on his way.

"Things could have been better," he said. "But we have now sorted out ourselves and we are good to go."

He was especially thankful to his employers (The Gleaner) and telecoms giant Digicel, who supported with the Jamaica team's airfare.

The veteran road racer will bow into action tomorrow and although he was a bit concerned about jetlag, he wants to better his performance from 2013, noting that he is in much better condition. He also expects the team to earn a minimum of four medals at the championships.

"Right now, I am trying to better my time," said Anderson. "I ran 20 minutes and 17 seconds in Porto Allegre, Brazil, in 2013, at the last championships. I finished eighth in my heats and was 37th overall out of 65 and I hope I can better that.

"I am closer to top shape than in 2013. I didn't get much racing other than the road races, but once I touch the track, I will give my best. I want to win my heats and get a PR," he noted.

"We have high expectations going there. Everyone knows me as the 5,000 metres man. In the 400 metres, Gavin Shand is confident of picking up a medal, James Beckford (long jump) is a sure medal and our captain, Samuel Brevett, in the 100 metres, is confident he can medal, so we are looking for at least four to six medals."