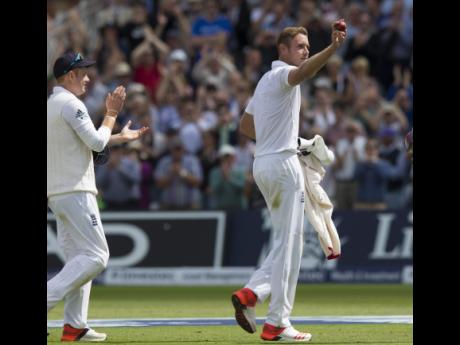 AP
England’s Stuart Broad raises the ball after taking eight wickets for 15 runs as Australia are bowled out for 60 before lunch on the first day of the fourth Ashes Test at Trent Bridge cricket ground in Nottingham, England.

In his pre-match rally, England captain Alastair Cook called on a teammate to make the telling intervention in the fourth Ashes Test so their "name will be etched in history forever".

That man proved to be Stuart Broad.

It couldn't get any better for Broad yesterday.

The best figures by a pace bowler in the 133-year history of the Ashes.

Only the fifth player to take 300 wickets for England.

Moving your team to the cusp of a series win against all the odds.

And all that on your home ground.

"The perfect day" was Broad's assessment after helping to dismiss Australia for just 60 in 18.3 overs on an extraordinary first day at Trent Bridge. England finished the day on 274-4, with a lead of 214 runs and one hand on the little urn.

The last time Broad delivered such a devastating spell of bowling, he was playing for his school at under-15 level and returned figures of 7-12. It hardly compares to the stage on which he found himself yesterday.

Asked to lead England's attack in the absence of Jimmy Anderson, the 6-foot-5 Broad grabbed the new ball under gray skies and with a hint of rain in the air. In those conditions, and when his tail is up, you wouldn't want another bowler at your disposal.

Broad has been described as a streaky bowler - going through as many barren patches as hot spells - and it was reckoned he'd never top the burst of 6-20 in 45 balls that led England to an Ashes-clinching win in Durham in 2013.

But from the moment he enticed an edge from Chris Rogers on the third ball of the day, there was no stopping him. Australia just couldn't handle Broad's length and movement off the seam. It was fitting that 54 balls later, Broad was the player to finish off the tourists with the wicket of Nathan Lyon.

"I've always been one of these bowlers who gets on a rhythm and picks up wickets in a short space of time," Broad said. "But I never dreamt I'd be able to get eight wickets in a spell.

"It's a bit of a freak day, but it's what you work hard for, those moments when it all works for you. It's great to have a personal best against Australia."