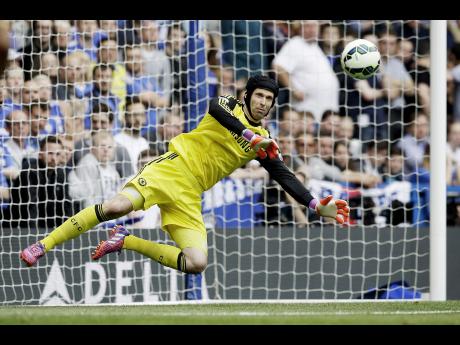 File
In this Sunday, May 24, 2015 file photo, Chelsea goalkeeper Petr Cech makes a save during the English Premier League football match between Chelsea and Sunderland at Stamford Bridge stadium in London. Cech has since moved to Arsenal and will make his Premier League debut for the Gunners this weekend.

Chelsea could have to begin the defence of their Premier League title without striker Diego Costa when the champions host Swansea at Stamford Bridge tomorrow on the opening weekend of the new season.

The Spain striker, who propelled Chelsea to the domestic title with 20 goals in 2014-15, missed his side's 1-0 loss to Arsenal in the Community Shield last weekend with a hamstring problem. It's the same type of injury that restricted his appearances throughout the last campaign and JosÈ Mourinho is unlikely to risk Costa's health early. That means new signing Radamel Falcao could spearhead Chelsea's attack for the opening encounter.

Falcao's arrival at Chelsea is an intriguing one - the Colombia international was one of the most prolific marksmen in the game until his clinical form deserted him last season during a loan spell at Manchester United from Monaco.

He managed only four goals in 29 appearances in an underwhelming year at Old Trafford.

But Mourinho has taken a chance on the forward, again on loan, hoping to help Falcao return to the form that saw him score 68 times in 86 appearances for Atletico Madrid from 2011-13.

FIRST THE WORST FOR UNITED?

The Dutchman will be hoping it is not an omen, as his team again takes part in the Premier League curtain raiser tomorrow, this time hosting Tottenham.

Van Gaal could hand debuts to Memphis Depay, Bastian Schweinsteiger, Morgan Schneiderlin and Matteo Darmian and still has David de Gea in his ranks, despite regular reports Real Madrid are lining up a move for the goalkeeper.

De Gea will have to keep Tottenham's Harry Kane at bay, as the striker looks to build upon his breakthrough season last year where he scored 31 goals in all competitions.

Liverpool returns to Stoke on Sunday, the scene of a humiliating 6-1 mauling on the final day of last season.

A beleaguered Brendan Rodgers accepted after the game that "if the owners want me to go, I will go".

But, he remains as Liverpool manager and leads a new-look side back to Stoke, looking to banish the memories of the defeat in May.

Christian Benteke bolsters Liverpool's attack after a $50.7-million switch from Aston Villa. Behind him, Phillippe Coutinho could be partnered by his Brazil compatriot Roberto Firmino, who joined Liverpool in a reported $45.8-million transfer from Hoffenheim.

Arsenal's season begins at home to West Ham and Arsene Wenger can be quietly optimistic of his team's chances of mounting a title challenge.

The arrival of goalkeeper Petr Cech, from London rival Chelsea, strengthens a defence that has often lacked the assured nature of rivals such as Chelsea and Manchester City.

The 33-year-old Cech won four Premier League titles at Stamford Bridge and his presence is expected to add some sternness to Arsenal's backline.

Striker Alexis Sanchez will not feature against Slaven Bilic's West Ham. He is being rested after winning the Copa America with Chile in July.