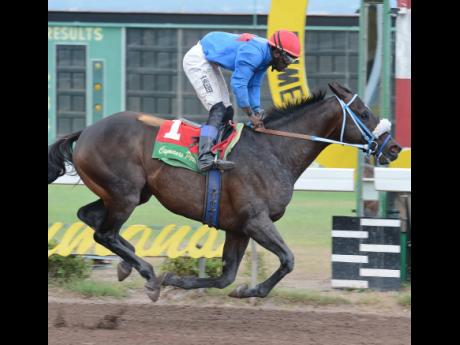 The 2013 derby and St Leger winner, PERFECT NEIGHBOUR, made amends for his near miss a year ago with an emphatic victory in the 52nd running of the Prime Minister's Stakes grade-one feature over 2000 metres at Caymanas Park yesterday.

Installed a 6-5 favourite with title-chasing jockey Robert Halledeen riding for champion trainer Wayne DaCosta, PERFECT NEIGHBOUR, toting topweight of 57.0kg, won by five lengths from his highly fancied stable-companion, ALL CORRECT (9-5), with Paul 'Country' Francis in a field of six, erasing the memory of last year's race when he was beaten a short head by COMMANDING CHIEF, with champion jockey Dane Nelson at his brilliant best.

Yesterday, there was no such intrigue. PERFECT NEIGHBOUR, drawn at post position one, raced prominently in third as MILITARY MOVE (11-1) led comfortably from ALL CORRECT turning into the backstretch.

ALL CORRECT shot past MILITARY MOVE at the half mile, but PERFECT NEIGHBOUR soon went in chase on the outside and assumed the lead entering the straight. Thereafter, it was smooth sailing as the classy five-year-old horse by Natural Selection out of Desperatehousewives moved away from ALL CORRECT to win in the fairly good time of 2:06.3.

This marked his first win from five starts this season, but according to DaCosta, he has had to be running him over sprint and middle distances due to a lack of suitable distance races for grade-one horses on the calendar.

"Since winning the Harry Jackson Memorial Cup over a mile and a half last Boxing Day, I was forced to run him in the Lady Geeta Trophy and Lotto Sprint Trophy just to keep him race fit. He ran over a more suitable trip at nine furlongs in the Viceroy Trophy on June 27, and although running well for second to stable companion Hover Craft, had to wait too long for a suitable race.

"He will now have to wait for another two and a half months for the Governor General's Stakes in mid-October (Heroes Day) before embarking on his major objective - the Superstakes - a month later," explained the Hall of Fame trainer.

"I was very encouraged by this performance, as he not only won in a good time, but carried the weight well," said DaCosta, who is on course to win a record 15 trainers' championship this year, which would surpass the legendary Philip Feanny with 14 titles. PERFECTNEIGHBOUR is owned by Alfred Lee and Jeffrey Mordecai.