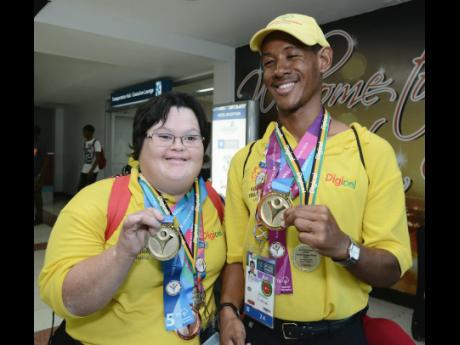 Ian Allen
Jonathan and Esther Lowe, husband-and-wife competitors of Special Olympics Jamaica, display their gold medals won at the just-concluded Special Olympics World Games in California. Jonathan captured his gold in swimming, while Esther won in Bocce. The two returned home along with the other members of the team on Tuesday.

Impressed by an unexpected silver medal in men's traditional basketball at the Special Olympics World Games in Los Angeles, California, earlier this week, coach Calvin Martin says he has nothing but respect for the multi-talented, focussed and hard-working members of Team Jamaica.

Jamaica's medal haul was 29 overall, but an 'inspirational' silver medal, from nothing, Martin maintains, "felt good".

The basketballers finished the Games with one loss and claimed silver behind Australia.

"Going into the tournament, we (basketball team) didn't expect to win any medal.

Mrs (Lorna) Bell just wanted to start back the programme, so she said, 'make a team,'" he added. Lorna Bell is the president of Special Olympics Jamaica.

That team consisted of runners and athletes from other disciplines.

While Martin outlined that the efforts were great, he underlined that special-needs schools across Jamaica are good places which turn out these talents.

One such school is Genesis Academy, which is run by Donna Lowe.

"So many medallists are past students of Genesis Academy; we are growing them well for success. They can do it, and they have done it," she told The Gleaner.