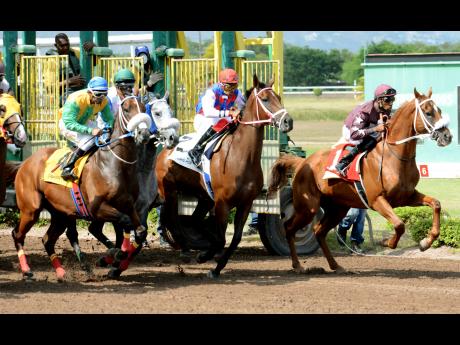 Ian Allen
LOCKED AND LOADED (right), with Shamaree Muir astride, gets a good break at the start of the fifth race, which he went on to win on the Independence Day race card at Caymanas Park on Thursday. He was an 11-1 winner.

Native-bred three-year-old non-winners of two take the spotlight at Caymanas Park today in the annual renewal of the Thoroughbred Owners & Breeders Association of Jamaica (TOBA) Trophy race over 1200 metres.

Indications are that the winner will come from this group, especially with the likes of TARANIS, BINGO KING and ROAD WI SEH looking really sharp at exercise.

ROAD WI SEH, a free-running sort who figured prominently for a long way in both the Lotto Classic (Governor's Cup) and the derby earlier this season, has changed stables since his last race, moving from trainer Patrick Chang to Lorne Kirlew, who has a good strike rate.

This being his easiest task for some time, ROAD WI SEH should come into his own and prove a tough opponent, with top apprentice O'Brien White riding this lightly raced 3-y-o colt by Adore The Gold out of Dream Watcher from the convenient mark of 54.5kg.

This being only his sixth outing, ROAD WI SEH has lots of scope and with middle distances more to his liking, gets a golden opportunity to supplement his maiden win over the round five course on March 28.

While I really fancy his chances, ROAD WI SEH can ill-afford to skip a beat, with TARANIS and BONGO KING present.

Both have been trained to the minute, the Richard Azan-conditioned TARANIS under leading jockey Shane Ellis extensively prepared by his trainer in preparation for this trophy. The Everal Francis-trained BONGO KING has also caught the eye in his preparation and along with the very fit TURBO MACHINE CAT (Omar Walker up) should take it down to the wire for the major share of the $868,000 purse.

But ROAD WI SEH could just be that much classier than his opponents and now reverting to a more suitable middle distance trip, should rebound with a win at the expense of main rivals TARANIS and BONGO KING.

Other firm fancies on the card are BARS OF GOLD, with leading jockey Shane Ellis to stave off old rival GEISHA'S GLORY in the third race for the Aston Commock Memorial Trophy over 1700 metres; DOOLAHIN to rebound in the fourth for maiden three-year-olds; COUNTRY TRAIN for in-form trainer Marlon Anderson in the fifth; THE BEST FLYER to go one better in the seventh; and SUPERIOR QUALITY in the ninth for overnight-allowance horses over 1100 metres.