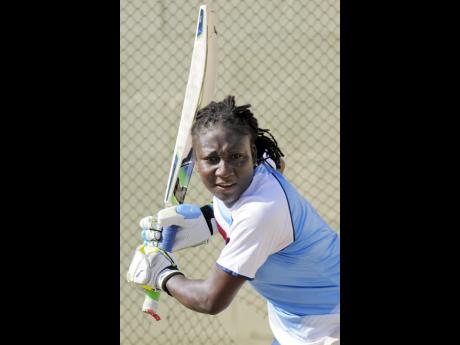 A Shaquana Quintyne half-century and three-wicket hauls from Deandra Dottin and Shakera Selman helped Barbados beat Jamaica by 32 runs in their opening game of the Regional Women's Super50 here Thursday.

Opting to bat first at Caldrac Cricket Club, Barbados were dismissed for an inadequate 172 off 45.5 overs, with skipper Quintyne top-scoring with 60 and fellow West Indies player Kyshona Knight getting 40.

Part-time seamer Natasha McLean spearheaded the Jamaica attack with four for 18 while off-spinner Chedean Nation picked up two for 31.

In reply, Jamaica put up a short fight before being bundled out for 140 off 41.3 overs as Windies seamers Dottin (3-22) and Selman (3-26) destroyed the innings.

West Indies batting star Stafanie Taylor hit a patient 29 but was the only batsman to get past 20.

However, the 19-year-old Quintyne combined with Knight in a 91-run, fourth-wicket stand to rescue the innings. Quintyne faced 107 deliveries and struck four fours, while Knight, a left-hander, hit two fours and a six in an innings lasting 71 balls.

Once the partnership was broken, Barbados fell away, losing their last seven wickets for 59 runs.

Jamaica were making a fist of it at 99 for three until Selman and Dottin were introduced, and they lost their last seven wickets for 41 runs.

Jodian Morgan perished in the fourth over for eight with the score on 14, but Taylor and opener McLean (16) added 27 to stabilise the run chase.

When McLean and Jerona Walcott (7) fell in quick succession, Taylor and Nation put on a further 40 runs for the fourth wicket to frustrate the Barbadians.

Taylor spent two hours at the crease and faced 77 balls but failed to hit a single boundary.

Her dismissal, bowled by Selman in the 31st over with the score on 119, triggered the slide as Jamaica lost six wickets for 21 runs.