Courtois sent off as Chelsea draw 2-2 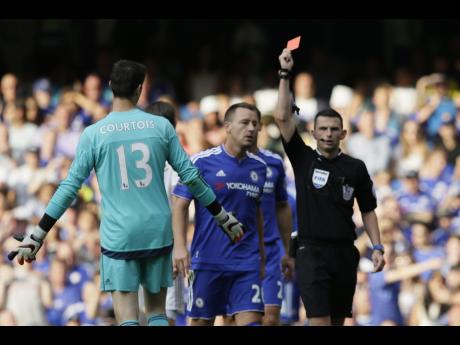 Chelsea began their Premier League title defence with a red card for goalkeeper Thibaut Courtois and a 2-2 draw at home to Swansea on a frustrating opening day for the English champions.

JosÈ Mourinho's side twice had the lead, but paid the price for Courtois' rash challenge on Swansea striker Bafetimbi Gomis as the France international raced through on the counterattack.

Referee Michael Oliver had no hesitation in producing a straight red card and pointing to the spot, allowing Gomis to beat substitute keeper Asmir Begovic from the spot and make it 2-2.

Manchester United, seen as challengers for Chelsea's title this season, needed an own goal to beat Tottenham 1-0 in the day's early kick-off, while Claudio Ranieri's Leicester beat Sunderland 4-2, and Crystal Palace earned a controversial 3-1 win at Norwich.

There was no fairytale start to Bournemouth's first-ever season in the English top flight, as the team slumped to a 1-0 defeat to Aston Villa at their 11,700-capacity seaside stadium.

Watford, promoted along with Bournemouth at the end of last season, were twice in front against Everton before having to settle for a 2-2 draw at Goodison Park.

The biggest game of the day was saved for last, though, as Chelsea came out for what was expected to be a routine victory at Stamford Bridge.

In a hectic spell midway through the first half, Oscar put the hosts ahead in the 23rd minute, AndrÈ Ayew levelled in the 29th and Chelsea's lead was restored with an own goal by Swansea defender Federico Fernandez.

However, everything changed within 10 minutes of the restart, when Courtois felled Gomis as the France striker burst into the area on the break.

Gomis easily converted the penalty in the 55th minute and also had the ball in the back of the Blues' net in the 68th, but the strike was ruled out for offside.

Chelsea were not the only side that had to rely on an own goal yesterday.

At Old Trafford, Spurs defender Kyle Walker handed all three points to United by steering the ball into his own net in the 22nd minute as he tried to tackle United captain Wayne Rooney.

It was one of very few chances in a scrappy match which Louis van Gaal's new-look United started with four pre-season signings.

Sergio Romero was in goal after Van Gaal decided that Real Madrid target David de Gea was not in the right frame of mind to play. Fullback Matteo Darmian, along with midfielders Morgan Schneiderlin and Memphis Depay, all made convincing debuts, and Romero improved after some early signs of nerves.

"It was a very difficult game because you have seen two teams that want to press. So every player at the ball had a very small (amount of) time to play," Van Gaal told BT Sport. "We didn't keep the ball too much ... but we created a few chances."

Leicester were the place to go for goals, where former Chelsea coach Ranieri made an ideal start to his return to the Premier League after an 11-year absence.

Jamie Vardy struck first with a header after 11 minutes, and Riyad Mahrez scored in the 18th and from the penalty spot in the 25th. Jermain Defoe and Steven Fletcher grabbed second-half goals for Sunderland, while Marc Albrighton got Leicester's fourth to seal the points.

Nothing went right for Norwich, which had a potential equaliser disallowed in what became a heavy home defeat.

Premier League action continues on Sunday with Arsenal at home to West Ham, Newcastle hosting Southampton and Liverpool away to Stoke.