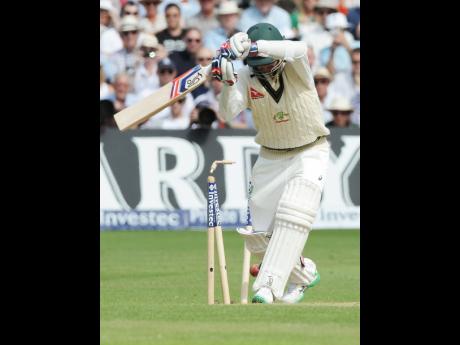 AP
Australias Nathan Lyon is bowled by Englands Mark Wood as England beat Australia by an innings and 78 runs to win the Ashes during day three of the fourth Test at Trent Bridge yesterday.

England completed their 18-month transformation from national embarrassment to Ashes winners yesterday, taking 40 minutes to wrap up a series-clinching victory over Australia in the fourth Test that ushered in the international retirement of Michael Clarke.

When Nathan Lyon chopped a delivery from Mark Wood onto the stumps to end Australia's misery at Trent Bridge, England's jubilant players gathered in a huddle near the crease and jumped up and down in celebration at regaining the urn.

A victory by an innings and 78 runs moved England into an insurmountable 3-1 lead with one Test remaining, a scarcely believable scenario considering the Australians came into the series as big favourites. England had also been scarred by a 5-0 defeat Down Under 18 months ago, which sparked soul-searching and a regime change in English cricket.

"I didn't think we were quite ready to win the Ashes at the beginning," said an emotional Alastair Cook, who survived as England captain throughout the upheaval. "But the guys have surprised me."

The English have won five of the last seven Ashes series, and the last four at home an indication of just how tough they are to beat in English conditions when the ball swings and batsman's technique is tested.

England won with two days and more than two sessions to spare in Nottingham, mirroring the eight-wicket win in the third test at Edgbaston.

With minutes of the result, Clarke announced he will be retiring from Test cricket after the fifth Test at The Oval to end a 12-year international career.

The tourists resumed yesterday on 241-7 and it took 22 balls for Ben Stokes to get a nick off Mitchell Starc (0), with Ian Bell taking the catch at second slip. Stokes finished with career-best figures of 6-36.