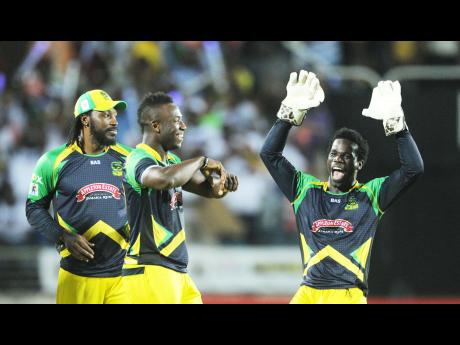 Ricardo Makyn
Jamaica Tallawahs players, (from left) Chris Gayle, Andre Russell and Chadwick Walton celebrate the fall of a wicket during a match against Trinidad and Tobago Red Steel at Sabina Park on July 9.

The 2015 version of the exciting CPLT20 has come and gone. The Trinidad and Tobago Red Steel have won the title in a blazing finish, and the people of the Caribbean wait anxiously for next year's renewal.

In my opinion, a few of the people are waiting for the fast, exciting play of T20 cricket, with balls flying in every direction and over the boundary.

Most of the people, however, are waiting for the return of the entertainment, the carnival of music-makers, half-naked, sweaty drum beaters, attractive and beautifully clad dancing girls, painted fire-eaters, and the constant cacophony of noise which follows them around the islands, and Guyana.

There is also the "I love this place" man, Danny Morrison, the former cricketer who, seemingly, loses control of himself every time the bat connects with the ball, or the ball hits the stumps, or each time the ball goes up in the air. Whether to sail into the stands or to be caught, by the simplest of catches, many of them transformed into things of real beauty by the excited commentators.

The Hero CPLT20 was exciting, no doubt about it.

The Hero CPLT20, however, was certainly unlike the West Indies Under-19 competitive tournament.

As a development/competitive affair, the Under-19 tournament was a disappointing 50-over contest. Instead of a longer game for development purposes, it was quietly arranged to be played in Jamaica. It was secretly played at only rural venues. It attracted very little interest from even those who knew it was on, and it ended just as it had started, in almost complete secrecy.

Congrats to Guyana for winning the title, however, for although very few people knew about it, as the popular saying goes, 'half a loaf is better than no loaf at all'. Apart from the secrecy of it all, it may be better to play a 50-over regional tournament instead of a three-day affair than to play no tournament at all.

It is strange, however, how things have changed so quickly over the past 55 years.

In 1960, the Jamaica All-Schools team went to Trinidad and Barbados. They played three-day matches. They played at Queen's Park Oval and Kensington Oval, and in 1961, the Barbados team came to Jamaica and they played all their matches at Park.

Soon, the Jamaica All-Schools team changed to become the Jamaica Youth team, and it participated in the West Indies Youth Tournament with the matches played as three-day contests and at all the region's top venues.

Today, after playing 50-over cricket and three-day tournaments, after expanding to include the Under 15 and the Under 17 age groups, after producing most of the region's best players, and after the West Indies had risen to the pinnacle of world cricket, the West Indies are not even back to square one.

They have fiddled with the scoring system in every tournament to the extent where they once seemed to have been asking a batsman to run himself out in order to secure a point to win the then Shell Shield, and where teams in their youth tournament now get an additional one-tenth of a point for every wicket a fast bowler takes in a match.

In a confusing situation, the fast bowler gets more for his effort, for taking a wicket, than a slow bowler gets for doing the same thing, the important thing, and that is getting a wicket.

In all of this, the West Indies run the risk of not qualifying for the 2017 Champions Trophy.

Eight teams will have to qualify for the Champions Trophy, they have to qualify by September this year, and the last place is between the West Indies (number nine) and Pakistan (number eight) with Bangladesh already in at number seven.

At a time when West Indies cricket should be moving full steam ahead to get back, or to try and get back to the former glory days in all three formats, at a time when to play more cricket appears the thing to do, it still does things like limiting the time for teams to bat at its age group levels, and it still has been fiddling with such unnecessary things as the scoring system.

At a time when three-day cricket is important for their development towards playing Test cricket, it has stopped the three-day game and is now playing 50-over games alone at the Under 19 level.

Maybe the reason for doing so is the lack of money, but surely, it must be better to trim everything else, including the tendency to employ people for every little thing, including cutting the number of the staff and the number of "officials" which travel with the West Indies team, including the per diem paid to Board officials whenever they attend meetings or things like that, and including running a tighter ship as far as the spending of the Board's money is concerned.

Fifty-five years is a long time, and the times, definitely, have changed, especially if the idea is only to concentrate on the development of T20 cricket or 50 -over cricket.

If, however, the idea is to develop all three forms of the game, with the emphasis on the longer version of the game, then fiddling with the fundamentals of the game, and how it is won or lost, and having a regional competition which caters only to the 20 -over and to the 50-over formats is a backward step.

Cricket, throughout the years, has been a game of bat and ball, of the conflict for ascendancy between bat and ball, and the team which makes more runs, against pace or spin, or sometimes takes more wickets by pace or spin, wins a match. It is as simple as that, and it has been that way for a long, long time.

To try and change it, to award a fraction of a point for a fast bowler's wicket, to reward a fast bowler more than a slow bowler for doing the same job is begging for trouble, at least that is what the echoes of the past seem to be saying.

The West Indies should listen to them, and not, in this case, only to foreign voices.