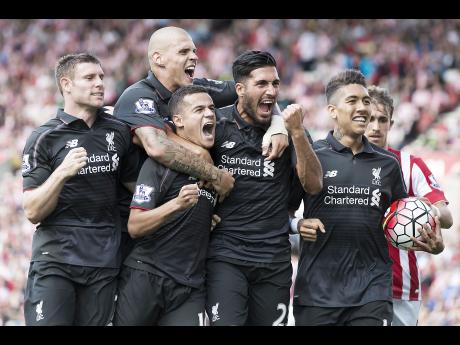 Bournemouth's greatest day was ruined by Aston Villa substitute Rudy Gestede, who marked his debut for the club with the winner. Bournemouth, last season's championship winners, were left to regret several wasted chances in their first-ever game in the Barclays Premier League before Gestede, signed from Blackburn for PS6 million, headed the game's only goal.

Barclays Premier League champions Chelsea suffered a setback in the defence of their title when they had goalkeeper Thibaut Courtois sent off and dropped two valuable home points. Oscar gave Chelsea the lead with an early free kick only for debutant AndrÈ Ayew to level for the Welshmen. Federico Fernandez converted William's cross beyond his own keeper to hand Chelsea the lead before Courtois was sent off and replacement Asmir Begovic was unable to stop Bafetimbi Gomis' spot kick.

Arouna Kone struck late on to secure a point on Watford's return to the Barclays Premier League. Mexican Miguel Layun put Watford ahead in the first half before Ross Barkley's remarkable shot put Everton level. Odion Ighalo's goal gave Watford the lead for a second time but, three minutes later, substitute Kone stole a draw with a clever finish.

Former Chelsea boss Claudio Ranieri began his reign at Leicester City by taking the club to the top of the Barclays Premier league. Leicester netted three times in the opening half-hour, with Jamie Vardy opening their account. Riyad Mahrez then headed home before scoring from the penalty spot. Jermain Defoe replied for Sunderland but, after Marc Albrighton had struck for Leicester, Steven Fletcher's late header was mere consolation.

Spurs defender Kyle Walker claimed a piece of unwanted history in the Barclays Premier League when his goal for Manchester United became the first opening goal of the Premier League season to be an own goal. United, whose manager Louis van Gaal was celebrating his 64th birthday, took the points after Walker, attempting to tackle Wayne Rooney, put through his own net.

Norwich's return to the Barclays Premier League was ruined by Crystal Palace, though the result hinged on a goal that was controversially ruled out. Cameron Jerome's hooked effort was wrongly ruled out by rookie ref Simon Hooper when it should have given the home side an equaliser. Wilfried Zaha and Damien Delaney had put Palace two goals up and after Nathan Redmond pulled one back for City, Jerome's effort was ruled out and Eagles debutant Yohan Cabaye sealed the win.