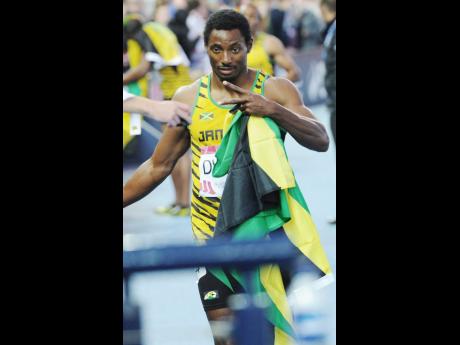 JAMAICA were in record mood at the NACAC Senior Championships in San Jose, Costa Rica, yesterday, capturing two gold and one bronze medal.

Heavy rain and thunderstorm had forced a postponement of the 4x100m on Saturday night.

Jamaica did not field a team in the women's event. However, the men's team was in a no-nonsense mood as they sped to an impressive record run of 38.07 seconds.

A few hours later, Dwyer took the track in the men's 200m final, where he was the favourite to win the gold medal, following his 20.17 seconds record run in the semi-final the previous day.

Drawn in lane four, the Jamaican covered his rivals quickly before sprinting away to a new meet record of 20.12 seconds.

Yancarlos Martinez of the Dominican Republic finished second in 20.37, while Antoine Adams of St Kitts/Nevis took bronze in 20.47.

Olympic and Word Championship medallist, Kerron Stewart, continued along a miserable path this season, as she placed fourth in the women's 200m final, in 22.80 seconds. Her teammate, Jodean Williams, finished sixth in 23.12 seconds.

The United States' Kyra Jefferson won the gold medal in a Championship record 22.50 seconds, just edging out Trinidad and Tobago's Samoy Hackett, 22.51 and Dezerea Bryant, also of the United States, who claimed bronze in 22.58.

McDonald, the fastest qualifier going into the women's 800m final, finished third in 2:02.14.

Other Jamaicans fared worse yesterday. Samantha Elliot was fifth in the women's 400m hurdles final in 56.26 seconds, as the United States' Tiffany Williams won in a record 54.37.

In the men's equivalent, Javarn Gallimore placed sixth in 50.59 seconds.

On Saturday night, Kamal Fuller gave the country its third medal, as he took silver in the men's long jump final with a leap of 7.88m.

At press time last time, Jamaica were poised to add to the medal tally, with teams in the respective men's and women's 4x400m finals.